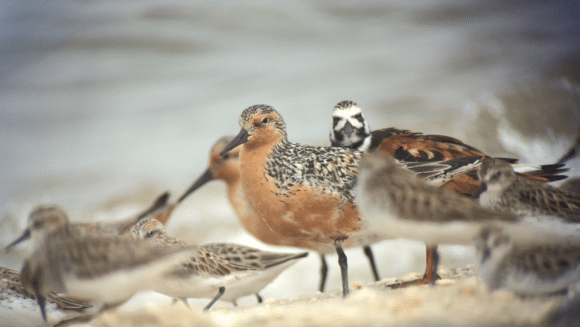 Oyster farming as currently practiced along the Delaware Bayshore does not significantly impact four shorebirds, including the federally threatened red knot, which migrates thousands of miles from Chile annually, according to a Rutgers-led study.

NEW BRUNSWICK, N.J. — Oyster farming as currently practiced along the Delaware Bayshore does not significantly impact four shorebirds, including the federally threatened red knot, which migrates thousands of miles from Chile annually, according to a Rutgers-led study.

The findings, published in the journal Ecosphere, likely apply to other areas around the country including the West Coast and Gulf Coast, where oyster aquaculture is expanding, according to Rutgers experts who say the study can play a key role in identifying and resolving potential conflict between the oyster aquaculture industry and red knot conservation groups.

“Our research team represents a solid collaboration between aquaculture research scientists and conservation biologists, and we’ve produced scientifically robust and defensible results that will directly inform management of intertidal oysterculture along Delaware Bay and beyond,” said lead author Brooke Maslo, an assistant professor and extension specialist in the Department of Ecology, Evolution, and Natural Resources in the School of Environmental and Biological Sciences at Rutgers University–New Brunswick.

Aquaculture is a burgeoning industry along the Delaware Bayshore, infusing millions of dollars into local economies annually, and the production of oysters within the intertidal flats on Delaware Bay has grown in the last decade.

Although a relatively small endeavor now, rising public interest in boutique oysters for the half-shell market (known as the Oyster Renaissance) and the “low-tech” nature of oyster tending make oyster farming an attractive investment for small-business entrepreneurs.

“Oyster farming has many ecological benefits and is widely recognized as one of the most ecologically sustainable forms of food production,” said co-author David Bushek, a professor and director of Rutgers’ Haskin Shellfish Research Laboratory in Port Norris, New Jersey. “Farmers appreciate the ecology around them as they depend on it to produce their crop. The idea that oyster farming might be negatively impacting a threatened species concerns them deeply, so they’ve voluntarily taken on many precautionary measures. They’d like to know which of these measures help and which don’t as they all inhibit their ability to operate efficiently.”

Delaware Bay is a critical stopover area for the red knot, a reddish, robin-sized sandpiper. Every spring, the species feasts on horseshoe crab eggs after journeying from wintering grounds at the southern tip of South America. Red knots then fly to breeding grounds in the Canadian Arctic.

Researchers assessed the impact of oyster aquaculture along the Delaware Bay on red knots and three other migratory birds of conservation concern: ruddy turnstones, semipalmated sandpipers and sanderlings. The scientists found that oyster tending reduced the probability of shorebird presence by 1 percent to 7 percent, while untended aquaculture structures had no detectable impact.

The study showed foraging rates were mostly influenced by environmental conditions, especially the presence of gulls or other shorebirds. None of the four bird species of concern substantially altered their foraging behavior due to the presence of tended or untended oyster aquaculture.

Next steps include investigating how oyster aquaculture may influence interactions between red knots and their main food source, horseshoe crab eggs, as well as examining how the expansion of oyster aquaculture along the Delaware Bay may affect the availability of foraging habitat at this globally important stopover site.

Organic producers may be eligible for reimbursement of some certification costs
September 20, 2020