Home / Kentucky / Overwintering Asian lady beetles might extend their fly period in 2021
A new user experience is coming! We'll be asking you to login to your Morning Ag Clips account March 1st to access these new features.
We can't wait to share them with you! Read more here. 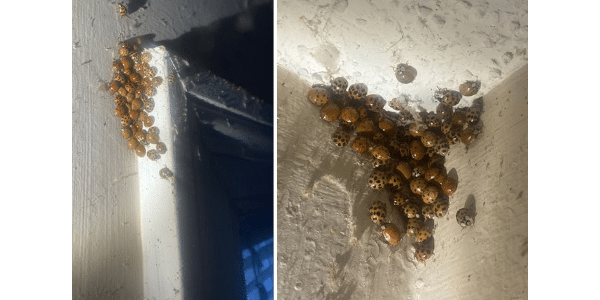 LEXINGTON, Ky, — I observed several clusters of more than 50 multicolored Asian lady beetles (Harmonia axyridis) per cluster in my garage (Figure 1). I left the garage door open for an entire day during the second week of November, and the beetles moved in. These lady beetles were looking for a sheltered space to overwinter. This behavior usually occurs from September to October in Kentucky, but the warmer days in early November (temperatures above 70° F) might have caused the late flight event.

The multicolored Asian lady beetle is an exotic predacious insect that is beneficial when it is outdoors but becomes unpleasant when it moves into man-made structures and remains indoors during the winter. Although this is an arboreal species in western Kentucky, it is widely observed in soybean, corn, and wheat fields.

Multicolored Asian lady beetles have been released in the USA many times since 1916, and the latest, more intensive releases were conducted in the 1980s. However, the first detections of established populations in the USA were in Louisiana in 1988. There is too much debate about the unsuccessful detection before 1988, despite the numerous releases in North America. It is possible that the many color variations of this ladybug misguided early observers. Multicolored Asian lady beetle occurs in many color morphs: ranging from pale orange to bright orange, with or without black spots on the wing covers, or completely black wings with bright orange spots. Adults are oval and convex, approximately 6 mm long, and 5 mm wide. A distinctive key characteristic in most morphs is an M-shaped mark on the pronotum (Figure 2).

Problems with the Increasing Populations of Asian Multicolored Lady Beetle.

This species has been released and detected in Europe, North America, South America, and Africa. In agricultural systems, it has beneficial effects by reducing populations of many pests in distinct crops. Nevertheless, there are many reports that shown negative effects of this introduced species. These are described below:

Management of the Asian Lady Beetle in Structures

The publication Asian Lady Beetle Infestation of Structures (ENTFACT-416) provides extensive information on how to manage this insect in buildings. I will briefly enumerate the methods to manage these infestations taken from the cited publication: