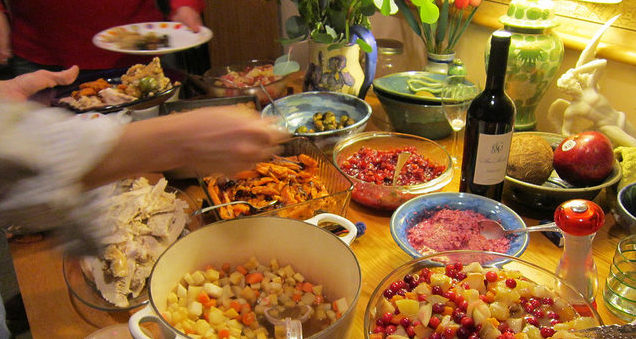 As you gather with your family for the holidays and start telling stories around the dinner table, be sure to mention a few things that have made your life better over the years, especially to the young people. If they don’t know about past improvements, they may stop striving to keep making this place better. (Selena N. B. H. via Flickr)

MANHATTAN, Kan. — There are certainly plenty of ongoing concerns in the world, but, at least for us humans, it has never been a better place to live. It’s easy to conflate headlines with the actual state of humanity. It’s an understandable reaction, but it’s also a misreading of what makes news. While most certainly recognize bias can creep into reporting on politics, there’s another bias that underpins all news decisions: a prejudice in favor of the unusual.

Crime, political intrigue and rare events drive coverage decisions because they’re not ordinary, and that’s what draws readers and viewers. Police blotters and obituaries consistently deliver eyeballs to newspapers and websites. Though it’s possible someone may welcome my obituary or arrest, I think I’m safe saying most don’t view those as good news.

In a way, this focus on the negative makes sense. Seeing daily stories about planes landing safely or drivers who didn’t crash their cars doesn’t seem all that interesting. Yet when we don’t stop and think about all those instances of things going according to plan, the headlines distort our reality. Bad news is immediate and reported constantly. Good news is slow and sporadic.

In a 2015 survey, just 6 percent of U.S. citizens said the world was getting better according to the website www.ourworldindata.org. That is astounding. It represents our failure to see ourselves in context of the world.

I would encourage you to visit the website and poke around it for a bit. It paints an entirely different picture of our lives than you’ll find in the news.

One reason for our increasing longevity is better nutrition. U.S. farmers and ranchers have led the way in producing more food on less land even as the population has ballooned from 3 billion in 1960 to 7.7 billion today. Today’s agricultural producers need about one-third of the land to get the same crop production as they did in 1961.

As researchers noted in a 2013 paper, “A combination of agricultural technologies raised yields, keeping downward pressure on the extent of cropland, sparing land for nature.”

Those productivity gains carryover at home, too. Housework, defined as meal prep, laundry and cleaning, took an average of 15 hours, 24 minutes in 2015, or about a quarter of the 58 hours those tasks took in 1900. Men, as my wife can attest, still have a way to go to get to an equal share. Women spend about an hour per day more on chores around the house.

All of this is logical, if not necessarily intuitive. Knowledge is a commodity that earns interest and pays dividends. In 1800 about 15 percent of the global population could read. The world literacy rate in 2016 was 86 percent. Gradual improvements over a couple centuries don’t make the headlines, but the end result is a world where nearly everyone can read those extraordinary stories that make things seem so gloomy.

As you gather with your family for the holidays and start telling stories around the dinner table, be sure to mention a few things that have made your life better over the years, especially to the young people. If they don’t know about past improvements, they may stop striving to keep making this place better.

Sutphin Cattle to host bull sale at 3i SHOW