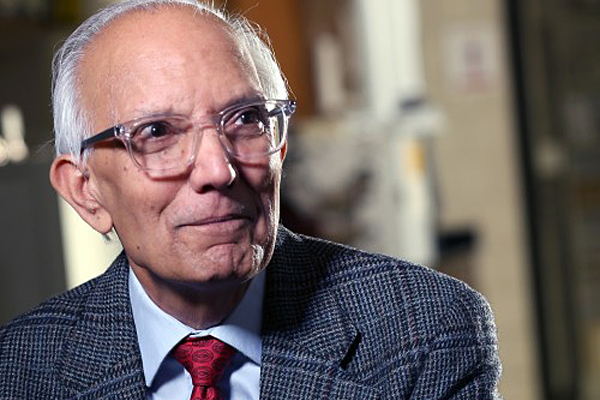 NANJING, China — Rattan Lal, Distinguished University Professor of Soil Science at The Ohio State University, on Oct. 28 received the 2018 World Agriculture Prize from the Global Confederation of Higher Education Associations for Agricultural and Life Sciences. His work focuses on the ability of soil to address such global challenges as climate change, food security and water quality.

The award honors Lal’s “exceptional and significant lifetime achievements” in the agricultural and life sciences, GCHERA officials said. It was presented in a ceremony at China’s Nanjing Agricultural University.

Lal is a faculty member in Ohio State’s School of Environment and Natural Resources, part of the College of Food, Agricultural, and Environmental Sciences. He is the director of CFAES’s Carbon Management and Sequestration Center, conducts research with support from the college’s Ohio Agricultural Research and Development Center, is an adjunct professor with the University of Iceland, and is the current president of the Vienna-based 60,000-member International Union of Soil Sciences.

The prize carries with it a cash award of $100,000, which Lal said he will donate to an endowment being developed to provide long-term support to the CMSC. Lal founded the center in 2000.

In presenting the award, GCHERA President John Kennelly said Lal is “globally recognized for his contributions to education and research in the sustainable management of world soils.”

Specifically, Kennelly said, Lal’s contributions have focused on two areas: managing the physical, hydrological and mechanical properties of soil to minimize the risks of soil degradation and to sustain food production; and restoring degraded and desertified soils by sequestering atmospheric carbon dioxide in soil and vegetation to adapt to and mitigate climate change.

“Lal’s mentorship of hundreds of students who have gone on to hold leadership positions in academia, government and industry ensures that his legacy will continue for many decades through the work of his students,” said Kennelly, a professor of agricultural, life and environmental sciences at Canada’s University of Alberta.

“He has worked for 50 years to enhance the prestige of the agriculture profession in general and that of soil science in particular,” Kennelly said. “His membership on scientific boards and advisory panels, and the many fellowships that he has been awarded, testify to his international status.

“Being the current president of the International Union of Soil Science, he is the global ambassador of soil science and agriculture.”

Gary Pierzynski, associate dean for research and graduate education with CFAES and a former past president of the Wisconsin-based Soil Science Society of America, said Lal has “amassed an impressive body of work that has produced great benefits for our soil resource around the world.”

“In my own international travels,” Pierzynski said. “I frequently encounter colleagues and former mentees of Dr. Lal who attest to the positive impact he has had on natural resource conservation and the soil science profession.”

SENR Director Jeff Sharp said Lal’s focus on restoring soil health through carbon sequestration is “significant not only to the goal of increasing global crop yields but also to the goal of sequestering atmospheric carbon dioxide in soil as humus.”

“His impact on the scientific community is substantial,” Sharp said, “particularly his extensive professional leadership roles and his commitment to mentoring scholars from around the world at the Carbon Management and Sequestration Center.”

Further details about Lal’s research and background can be found at go.osu.edu/LalGCHERAprize.

GCHERA presents two World Agriculture Prizes every year. They go to faculty and academic members from higher education institutions that work in agricultural and life sciences. One recipient comes from a country classified as having a developed economy; the other, from a country not so classified. 2018’s other recipient was University of Ghana plant breeder Eric Danquah.

GCHERA is made up of 15 higher education organizations from around the world, which together represent hundreds of universities working in the field of agricultural and life sciences. The United States, for example, is represented in GCHERA by the Association of Public and Land-grant Universities, of which Ohio State is a member.

GCHERA’s mission, according to its website, is to “encourage mutual understanding and global cooperation among the higher education associations and to provide, within the global context, leadership in education, research and innovation in the agricultural and life sciences.”