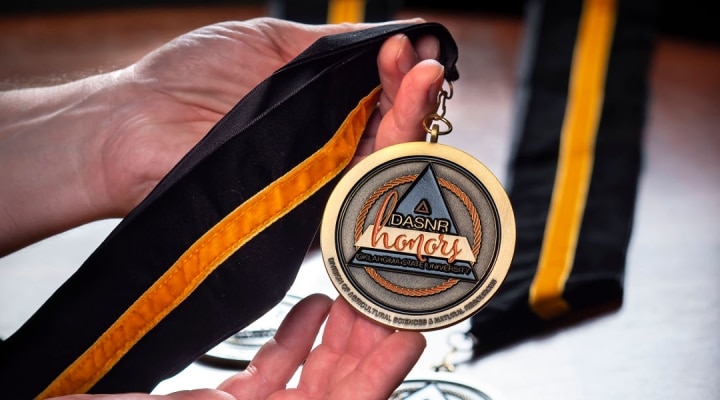 STILLWATER, Okla. — Oklahoma State University is honoring six individuals who have brought distinctive credit to the university’s Ferguson College of Agriculture and contributed significantly to society.

“We are proud to honor this group of alumni with such an esteemed award,” said Thomas G. Coon, vice president for OSU agricultural programs. “They have had a tremendous impact on the Ferguson College of Agriculture and provided significant benefits to their career fields, their communities, the state of Oklahoma and the university.”

Established in 1983, the Distinguished Alumni Award recognizes individuals whose accomplishments serve as a model for current and future Ferguson College of Agriculture students.

The OSU Division of Agricultural Sciences and Natural Resources is comprised of the Ferguson College of Agriculture and two state agencies: OSU Extension and OSU Ag Research.

Learn more about each honoree below or visit OSU Agriculture Honors online.

Brashears received both her master’s and doctoral degrees in food science, specializing in food microbiology, from OSU. She is an animal and food sciences professor at Texas Tech University, and in 2019, Brashears was inducted as the fifth Senate-confirmed undersecretary of food safety, which is the highest food safety job in the U.S. government.

Clint Rusk, department head for OSU’s Department of Animal and Food Sciences, nominated Brashears for the prestigious award and described her as a well-known, key expert in her field.

“She has excelled in the area of microbial food safety, especially related to the detection and control of Escherichia coli 0157:H7 in cattle,” Rusk wrote in his nomination statement. “Her research has involved both pre-harvest and post-harvest control of this foodborne pathogen in meats and has shown that feeding a selected probiotic culture to feedlot cattle resulted in as much as a 30% reduction in the incidence of E. coli 0157:H7 in the cattle.”

As an active alumna, Brashears stays in contact with the OSU food and meat science faculty by exchanging ideas, networking with students, and speaking to classes and groups about her research.

Campbell is a two-time graduate of OSU receiving his bachelor’s degree in animal husbandry and master’s degree in horticulture. He has spent a career in Extension serving as a county educator, faculty specialist, Oklahoma Gardening television host, interim department head in OSU’s Department of Horticulture and Landscape Architecture, and assistant director of agriculture and rural development programs and associate director for OSU Extension.

Justin Quetone Moss, horticulture and landscape architecture department head, nominated Campbell for the distinguished award and praised his dedication and creativity during his career.

In retirement, Campbell continues to give back to OSU Agriculture by serving as an ambassador for The Botanic Garden and volunteering numerous hours each year, as well as his philanthropic and civic activities throughout the community.

Galyean received his master’s and doctoral degree from OSU in animal science and animal nutrition, respectively. He currently is the provost and vice president of academic affairs at Texas Tech University, where he holds the position of Paul Whitfield Horn Professor in Texas Tech’s Department of Animal and Food Sciences.

As noted in Rusk’s nomination statement, Galyean has established himself as one of the top beef cattle nutritionists in the U.S. and the world during his more than 40-year career.

“Dr. Galyean’s contributions to animal science extend well beyond his own research program,” he wrote. “Many of the graduate students and post-doctoral students who worked under his guidance have gone on to noteworthy careers in research, education, Extension, and industry in the U.S. and several foreign countries. The success of his students, as evidenced by their productivity and numerous honors, is perhaps the best testament to Dr. Galyean’s leadership in livestock production research.”

In addition to his career achievements, Galyean and his wife have endowed five scholarships at various universities, including the Michael and Charlotte Galyean Scholarship for graduate students in ruminant nutrition at OSU.

They wrote: “Brett and Greg were instrumental in finding ways with their father to support students at OSU in agricultural education, from committing a major gift to the Department of Agricultural Education, Communications and 4-H Youth Development’s model agriscience teaching classroom and laboratory project to advancing their annual department scholarship by establishing two endowed scholarships.”

Robson graduated in 1953 from Oklahoma A&M with a degree in animal science. His career has centered around ranching, banking and real estate, and he is the current owner of Robson Ranch, a successful cattle operation that has been in his family since he was a young boy growing up in the Depression.

In his nomination statement, Rusk describes Robson as a philanthropist. Robson has given greatly to his hometown of Claremore, Oklahoma, with his family building and donating the Robson Performing Arts Center to the Claremore Public Schools. In addition, Robson contributed to the McKnight Center for Performing Arts at OSU, provided scholarships, and continues to serve as a leader and voice for teachers and education.