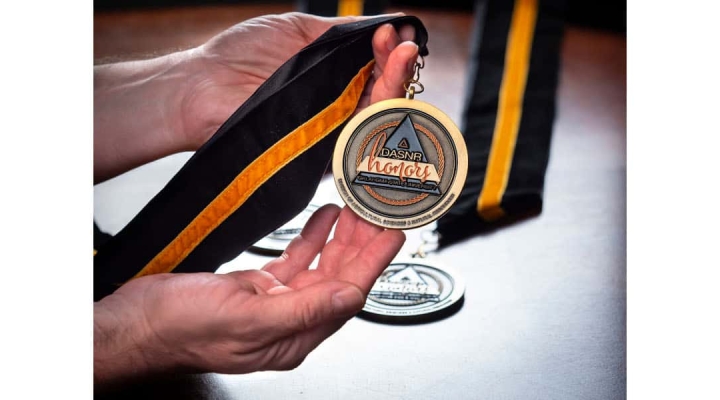 OSU Agriculture will honor recipients of the 2022 Distinguished Alumni Award during a ceremony on Oct. 28. (Photo by Todd Johnson, OSU Agricultural Communications Services)

STILLWATER, Okla. — Oklahoma State University is honoring six individuals who have brought distinctive credit to the university’s Ferguson College of Agriculture and contributed significantly to society.

“We are proud to honor this group of alumni with such an esteemed award,” said Thomas G. Coon, vice president and dean for OSU Agriculture. “They have had a tremendous impact on the Ferguson College of Agriculture and made significant contributions through their careers and to their communities, the state and the university.”

Established in 1983, the Distinguished Alumni Award recognizes individuals whose accomplishments serve as a model for current and future Ferguson College of Agriculture students.

The OSU Division of Agricultural Sciences and Natural Resources is comprised of the Ferguson College of Agriculture and two state agencies: OSU Extension and OSU Ag Research.

Learn more about each honoree below or visit OSU Agriculture Honors online.

Fenderson completed both his agronomy bachelor’s degree and weed science master’s degree at OSU in 1979 and 1982, respectively. Since graduation, he has worked with Velsicol Chemical, Sandoz Crop Protection, Monsanto Co. and currently Bayer Crop Science.

As the WestBred technical product manager, Fenderson works with a network of more than 100 retail dealers and producers in Kansas, Oklahoma and Texas. His reach includes more than 2 million acres directly and 5-6 million acres indirectly.

He has hired or been involved in the hiring of more than 20 OSU graduates during the last 28 years in the weed science/agronomy discipline. This in turn has provided employment opportunities for OSU students and delivered quality personnel back to Oklahoma.

Not only has agriculture been an integral part of Fenderson’s life, but his OSU roots also run deep. In 2010, his daughter became the 17th OSU graduate in his immediate family. Because of their support for OSU, Fenderson’s family endowed a scholarship in honor of his parents.

Hilst is a two-time graduate of OSU receiving his bachelor’s degree in agricultural economics and accounting in 1984 and an MBA in business administration in 1987.

Serving as a principal broker at CB Richard Ellis, Hilst’s education at OSU created the foundation for him to excel in his professional life. His experiences advanced his career in commercial real estate and contributed to the success of his company in Tulsa, surrounding communities and Oklahoma agriculture. Hilst has extensive interests in farming and ranching.

Hilst and his wife, Lynn, keep OSU at the forefront of their lifestyle. They are currently OSU Foundation Board of Governors members and are supportive stakeholders championing causes and campaigns in agriculture. As New Frontiers Cornerstone Donors, their business and farm connections have assisted with bringing others into the campaign, which will help build a state-of-the-art teaching, research and Extension facility for OSU Agriculture.

The Hilsts have helped foster hands-on learning and scholarship opportunities for students at OSU. Their giving started with establishing a charitable legacy fund at OSU and making a planned gift early in life.

Eifert Jones received her bachelor’s degree in agricultural economics with a marketing and business option from OSU in 1985. After graduation, she joined Dow AgroSciences, working with farmers and ranchers and teaching proper stewardship in the use of agro-chemicals.

She spent several years working for the U.S. Department of Agriculture Farm Service Agency in both the national Washington, D.C., office and Kansas state office. Eifert Jones traveled to nearly every state and Puerto Rico, affording her a front-row seat to a variety of farming practices in diverse conditions.

When she returned to her family farm near Waukomis, she brought her knowledge and insight from years of serving farmers, analyzing finances and seeing all types of operations. With above-average crop yields the last few years, Eifert Jones and her husband, Rodney, became major gift donors for the New Frontiers campaign.

In addition, Eifert Jones participated in the Oklahoma Agricultural Leadership Program in 2012, received the Master Agronomist Award from the OSU Department of Plant and Soil Sciences in 2017 and was named an Oklahoma Significant Woman in Agriculture in 2017.

As one of the most influential landscape architects in the U.S., Hughes’ leadership and passion have helped Halff Associates grow from three landscape architects and planners to more than 70 during his tenure. This includes many graduates from the OSU Department of Horticulture and Landscape Architecture.

Hughes’ peers recognize that his work benefits other landscape architects and is at the core of what they do best – make the world a better place.

In addition, Hughes received the OSU Department of Horticulture and Landscape Architecture Distinguished Alumnus Award in 2021.

Lee’s love for agriculture stems from multiple generations of family and was further enhanced through her experiences at OSU. She graduated in 1995 with a bachelor’s degree in animal science.

Following graduation, she was hired by John Deere and has grown professionally during her 27-year career. She currently serves as the manager of production agriculture marketing for John Deere.

Lee is a shining example of loyal and true. She shares career experiences with OSU students and invests in the future of the Ferguson College of Agriculture. She was an early supporter of the New Frontiers campaign, naming the rodeo coordinator office in memory of her mom, Mary Lee, and she served as the emcee for the New Frontiers groundbreaking event in 2021.

She established the Lee Family Scholarship in the Ferguson College of Agriculture, is an OSU Alumni Association Life Member, and serves as a member on the Oklahoma State Excellence in Diversity Board and the OSU Foundation Board of Governors.

A two-time graduate of OSU, Nix Smith received a bachelor’s degree in general agriculture in 1965 and a general administration degree in 1982. Born in Oklahoma City and a fifth-generation Oklahoman, Nix Smith moved to Tahlequah when she was three years old and currently resides there on her original Cherokee allotment.

She currently serves on the board of directors for the Cherokee Nation Foundation and is active in fundraising activities and award selections. Nix Smith established an endowment in her great-great grandmother’s name, who homesteaded in Tahlequah from the Trail of Tears. She also helped the Cherokee Foundation acquire funding for scholarships distributed annually to students.

In addition, Nix Smith has been stalwart in supporting the operations of the OSU Purebred Beef Center as well as the other animal units in the OSU Department of Animal and Food Sciences. She has helped grow the operational endowments for all six of the department’s animal units.

Smith and her nephew established the Nix Foundation, which supports the OSU Spears School of Business and is a major gift donor for the New Frontiers campaign.