With $100,000 in funding provided by Ohio State’s Office of Energy and Environment, a group of six independent students designed and constructed much of the microfarm, which consists of two high tunnels, which were installed by experts, housing raised plant beds, as well as several outside plant beds on a one-third-acre lot. ()

MANSFIELD, Ohio — Tyler Arter pulled weeds as he talked about the project Kent “Kip” Curtis believes will expand well beyond the borders of the parking lot where it’s located on the Mansfield campus of The Ohio State University.

“I kind of overheard it,” said Arter, an Ashland resident who graduated a year ago from Ohio State Mansfield with a bachelor’s degree in psychology. “I went to one of the first meetings, and I’ve been involved with it ever since.”

It is a microfarm, a concept brought to the regional campus by Curtis, an assistant professor of environmental history at Mansfield. His short-term objective for the project is to extend the growing season. The over-arching goal is to create a model for urban agriculture that spawns additional microfarms in the area that eventually produce and sell enough niche crop to become fully sustainable drivers in the Mansfield-area economy.

Arter joined Curtis last spring for an OSU Extension lecture in Cleveland where they toured hoop houses, also known as high tunnels, a series of hoops made of metal or plastic covered with poly plastic that use heat from the sun to raise plants beyond the typical growing season.

“Being in a hoop house is one of the coolest things,” Arter said. “The amount of stuff you can grow, the extension of your season, it’s definitely something I found interesting, and I wanted to be able to do it for myself.”

With $100,000 in funding provided by Ohio State’s Office of Energy and Environment, a group of six independent students designed and constructed much of the microfarm, which consists of two high tunnels, which were installed by experts, housing raised plant beds, as well as several outside plant beds on a one-third-acre lot. They completed construction this past fall. One independent study student, eight interns and a number of student volunteers maintain the farm.

In addition to promising potential benefits for the community of which the Mansfield campus is a part, the project offers students opportunities for growth academically and otherwise, Curtis said.

“They’re able to see the project go from blueprint to on the ground,” he said. “The sorts of things they’re having to do extend well beyond the urban agriculture project. It creates a whole set of executive skills. You need to tend to the plants. You need to think about the future. It’s a little bit of a different experience than you have on a smartphone or in the classroom. It requires intelligent, cognitive engagements, development of their thinking skills, and it impacts other areas of their life.”

Kyle Dues, an Ohio State Mansfield freshman from Kettering majoring in forestry, fisheries and wildlife, wants to be part of what Curtis describes as being “on the brink of the opportunity to really do something exciting and of massive importance in central Ohio.” He said he chose to enroll at Ohio State Mansfield primarily because of its EcoLab, of which the microfarm is a part.

He also enjoys the opportunity for more individual attention afforded by a smaller campus.

“There’s a benefit for interaction with the professors because they’re super helpful, every single professor on this campus,” he said.

“And they’re all looking for students to help them with research or to get involved in some way, like clubs or the microfarm: ‘I have this internship opportunity for you. Do what you want to do with it.’ They’re just throwing these opportunities out there for you.”

“Kip’s really good being hands-on when it requires it, but he’s not going to do it for you. If you do need help, he’s not going to shy away. He will help you, but you have to do your part to make the project work.”

Microfarm students don’t have to be pursuing agriculture-related majors, either, said Arter, who plans to go after a master’s degree in social work next fall.

“When we want to sell these crops, we’re going to have to meet with people,” he said. “I think it’s learning how to interact with the new environments that’s going to help me in my social work.”

If enough people share Arter’s interest and act on it, Curtis estimates the Mansfield-area community can keep an estimated $400 million it spends annually on produce shipped in from California and Florida.

Dues, who as an intern works four to five hours a week on the microfarm, could barely contain his enthusiasm as he discussed the project recently; he and Arter, the microfarm coordinator, have spoken to the school’s cafeteria officials about selling produce for the lunches it serves.

“That’s one of the reasons that I Iove it,” he said. “Probably one of the coolest aspects for this entire project is that phrase over and over ‘keeping local dollars local.’ If that could stay just a fraction in this community, it would be incredible.”

The positive effects of such microfarms, which focus on the growing of specialty crops such as kale, baby greens, cauliflower and cilantro, stretch beyond the monetary, he said, adding that overuse to meet nationwide demand is degrading soil in California.

“If we can cut down on the environmental impact in California and keep local dollars local in a sustainable way, the future just opens up at that point because of how much of a social impact that could have if we can provide local money and protect the environment.”

Curtis touted the importance of involving a range of community organizations in the microfarm project. He also plans to apply for a grant of approximately $2 million to expedite a low-risk startup environment and train 15 to 30 microfarmers.

“Our goal has been to kind of present a concept and then facilitate community conversation and get a broad coalition of partners,” he said.

Dues, like Curtis and Arter, would like as many students as possible to participate in the project. 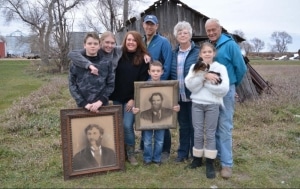