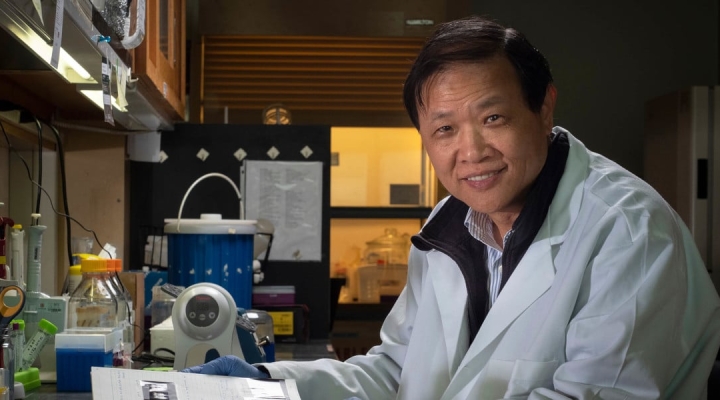 STILLWATER, Okla. — Building the genetic make up for the ideal wheat crop is no easy task.

Just ask Liuling Yan, the Dillon and Lois Hodges professor of wheat molecular genetics and breeding in the Oklahoma State University Department of Plant and Soil Sciences, who recently discovered the TaCol-B5 gene in wheat plants.

What makes this gene so special?

It enhances wheat yield by more than 10% – a significant increase in the world of wheat production.

Due to a rapidly growing human population and climate change, there is a need for crop varieties that produce high yields with limited amounts of artificial fertilizers and pesticides and that are more resilient to unpredictable weather.

Getting the most out of yield with cereals is a tall order with scientists having to create a delicate balance among genetic traits within wheat, such as seed size, seed number and head number. Scientists are creating this delicate balance within a highly complex genetic system in which 80% of genetic sequences are highly repetitive, and few genes have been connected to a specific plant characteristic, so figuring out what gene accomplishes what trait is no small feat. This makes assembling the genetic jigsaw puzzle that makes the most optimal wheat cultivar a complicated task, to say the least.

That’s why discovering genes like TaCol-B5 is so important for feeding the world. The direct effect on grain production makes it an excellent candidate for getting the most out of one’s wheat crop – literally.

“As I see it, this is a watershed discovery in the world of plant genetics,” said Scott Senseman, associate vice president of OSU Ag Research. “The possibility of having a greater than 10% yield increase through the activity of one gene in a wheat crop is a development that pushes the Green Revolution that Dr. Norman Borlaug started decades ago into another realm. With this discovery and its application, it could mean the difference between people having food and going hungry. It is difficult to find a discovery more impactful than that.”

The TaCol-B5 gene, which was discovered in wheat cultivar CItr176 from Mexico, increases the number of spikelets (a group of seed-producing flowers) on a wheat spike by more than three, which is significant when the spikes on a wheat plant usually only totals about 15-25 spikelets. The gene was also able to increase the number of fertile tillers (spikes with seeds) per plant.

“We need more evidence of the genetic traits in wheat cultivars,” Yan said. “We could have stopped with the what, but we continued on to the why, and the why is where the story is. The why is the mechanism behind how science works. It wasn’t enough to discover this gene. Understanding its genetics gave us the why of why this cultivar produces more.”

Yan’s research involved trying to find out what other wheat cultivars the TaCol-B5 gene resides in, and what he discovered is that this gene is rare, residing in only about 2% of wheat across the world. Before Yan and his colleagues discovered the genetic markers of this variant, scientists had no means of locating it within wheat plants.

Yan and his fellow scientists cloned the gene and placed it into a cultivar called Yangmai18, a cultivar with average yield rates. Research showed an average yield increase of 11.9% in the genetically modified plant, with the most significant yield increase of 19.8% in another progeny line. These experimental lines were not intended for commercial use but for understanding how the gene operates.

“When we breed a wheat variety, we go from the parent generation to the offspring generation. Producing a 5% increase in yield would qualify for releasing a new variety,” said Carver. “Now, switch over to this gene. We’re saying this gene can increase yield by nearly 12%. And that’s one gene. That is noteworthy. Are we going to get 12% every time we breed with that gene? We don’t know that for sure, but this gives us targets now for changing and improving yield on a molecular level. It’s a tool that we can now use to supplement and perfect what we do in the field.”

Due to Yan identifying the gene’s genetic markers, the gene has now also been identified in its naturally occurring state in the Billings wheat cultivar, and there is potential for locating it in other cultivars as well.

“In future breeding cycles, we will be tracking the gene in the Billings plant using Dr. Yan’s genetic markers as a means to locate it and affirm its presence,” Carver said.

Over the course of his career, Yan has cloned several wheat genes, including the TaOGT1 gene breakthrough this time last year. His research on the TaCol-B5 gene was recently published in Science, a scientific published by the American Association for the Advancement of Science. According to Science representatives, only 1% of the papers published in the journal are ag research related.

According to a perspective paper in Science, the discovery of TaCol-B5 is a “milestone toward enhancing yield in cereals” because it improves scientists’ understanding of the molecular mechanisms that control yield-related genetic traits.

“Few scientists make the attempt to submit scientific papers to the Science journal, and currently, less than 7% of articles submitted make it through the rigorous publication process,” Senseman said. “Historically, this journal has been one of the preeminent journals of the scientific community. It’s particularly noteworthy when agricultural work is highlighted, and we are very proud to have one of our university’s scientists featured in this publication.”