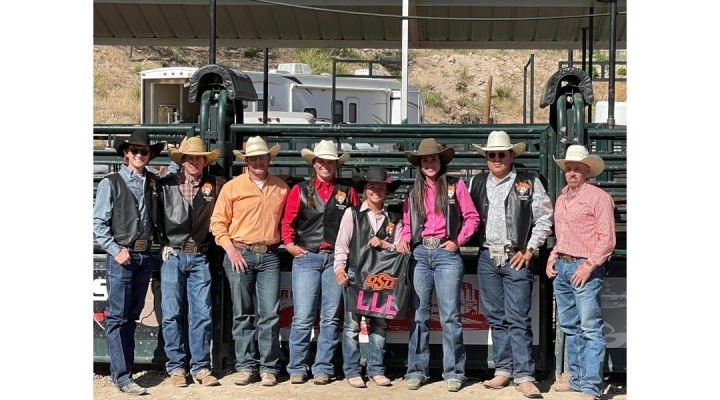 STILLWATER, Okla. – Six members of the OSU Rodeo Team are headed to Casper, Wyoming, to compete for Oklahoma State University in the College National Finals Rodeo June 12-18. The OSU Rodeo Team will compete against teams from 11 different regions across the country.

This year marks McNeill’s third appearance at the CNFR. She said she looks forward to the CNFR each year because it gives her the opportunity to meet new people and represent OSU. She added the team is headed into this year’s competition ready to compete at their highest level.

“I feel more prepared this year than I have in the past,” McNeill said. “I think our team has an incredible amount of tenacity. It’s going to be a great week for our team.”

“I am very excited about this year’s CNFR qualifiers,” Hollingsworth said. “I believe they are all strong competitors with a chance to do well in each of their events.”

Hollingsworth, who has served as the OSU Rodeo coach for a decade, has coached dozens of athletes to the CNFR, but he says the excitement is always fresh.

“This is the largest group we have had qualify since I have been here, and I think it is great to have such a talented group of student athletes representing Oklahoma State University,” Hollingsworth said.

He added that competing at the CNFR not only helps celebrate the athletes’ successful seasons, but it also reflects the strength and growth of the OSU Rodeo program over the years.

“I think it is key to building a program to have a consistent presence at the CNFR,” Hollingsworth said. “Having students not only qualify but do well each year shows incoming students and students interested in OSU Rodeo it can be done, and we have the foundation to help them get there.”

Representing OSU at the 2022 CNFR will be:

The OSU Rodeo Team is part of the university’s Ferguson College of Agriculture. The team has been a member of the National Intercollegiate Rodeo Association since 1948 and competes in the Central Plains Region. For more information, visit rodeo.okstate.edu.