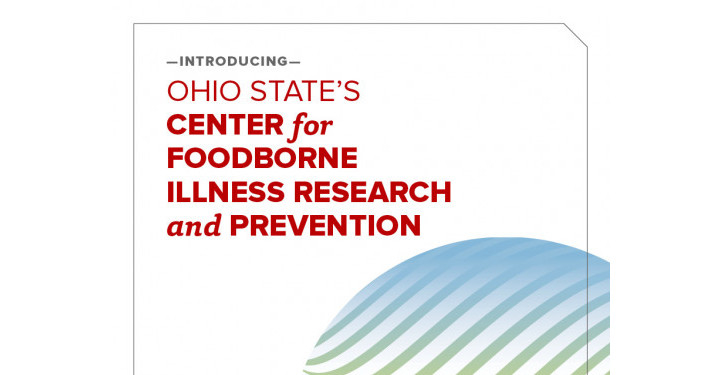 At The Ohio State University, a new food safety center will provide a centralized location for food safety resources and will further establish the university as a global leader in food safety. The Center for Foodborne Illness Research and Prevention (CFI) will bring its 13-year record of protecting public health to Ohio State’s College of Food, Agricultural, and Environmental Sciences (CFAES). (Courtesy Image)

COLUMBUS, Ohio — At The Ohio State University, a new food safety center will provide a centralized location for food safety resources and will further establish the university as a global leader in food safety.

The Center for Foodborne Illness Research and Prevention (CFI) will bring its 13-year record of protecting public health to Ohio State’s College of Food, Agricultural, and Environmental Sciences (CFAES).

Founded as a nonprofit organization in December 2006, CFI’s mission is to advance a more scientific, risk-based food safety system that prevents foodborne illnesses and protects public health by translating science into policy and practice, said Barbara Kowalcyk, a CFAES assistant professor of food science and technology and an internationally recognized food safety expert.

“Access to affordable, safe, and nutritious food is increasingly critical in order to sustain the world’s growing population,” said Kowalcyk, who co-founded CFI and is the center’s director. “The establishment of CFI at Ohio State will build on the university’s extensive, existing efforts to address this critical challenge.”

This is significant, considering the World Health Organization estimates that 600 million illnesses and 420,000 deaths are caused annually by 31 foodborne hazards worldwide. In the United States, serious foodborne bacteria, viruses, and fungi cause an estimated 48 million illnesses, 128,000 hospitalizations, and 3,000 deaths each year, conservatively causing $77.7 billion in medical costs and lost productivity.

“CFI has earned a reputation as a leader in improving food safety policies and practices through science-based approaches,” Kowalcyk said. “As a strong participant in national food safety coalitions, CFI has helped secure or improve food protections for American consumers.”

Among its many contributions, the center collaborated with other groups to develop, pass, and implement the Food Safety Modernization Act of 2010 (FSMA), which was the first major overhaul of food safety oversight at the U.S. Food and Drug Administration in more than 70 years. FSMA shifts the focus from responding to foodborne illnesses to preventing them.

The center also joined multiple efforts to strengthen government resources for national and state food safety programs, and it led an effort to require mandatory labeling of mechanically tenderized beef products, which have been associated with foodborne illnesses, Kowalcyk said.

The center will be housed within the CFAES Department of Food Science and Technology (FST).

“It is a perfect fit for the work the department does, considering FST’s strong history of impacting food safety challenges at the local, national, and international level,” said Sheryl Barringer, department chair.

“I enthusiastically support the establishment of the center in CFAES.”

“In bringing CFI to Ohio State, we hope to build a stronger network of food safety experts who have the resources and talent to address existing and emerging food safety problems,” Kowalcyk said. “CFI will work to create lasting strategic partnerships with food safety stakeholders and will develop new research and funding opportunities.”

CFI is dedicated to improving food safety globally as well as locally and nationally. Last November, Kowalcyk received a $3.4 million, four-year grant from the Bill & Melinda Gates Foundation and the U.K. Department for International Development to improve food safety in Ethiopia, where illness from unpasteurized milk and raw meat is commonplace.

Advancing food safety is a personal goal for Kowalcyk. In 2001, her son, Kevin, died at age 2 1/2 after suffering complications from an E. coliinfection that he developed, most likely, from eating contaminated ground meat. His passing fueled Kowalcyk to devote her career to preventing others from getting sick or dying from contaminated food and to help change national policies that hold food producers accountable to the public.

Kowalcyk co-founded CFI with her mother, Patricia Buck, a food safety advocate and educator, to focus on promoting science-based approaches to preventing foodborne illnesses. The center was created to facilitate, encourage, and promote research on food safety; translate and communicate science and its implications for food safety to stakeholders; and work on behalf of consumers to implement a stronger, more science-based food system that prevents foodborne diseases.

“As knowledge brokers, CFI staff work to translate science into practical, evidence-informed policies that protect public health and prevent foodborne diseases,” she said. “We have been and will continue to be a strong voice in creating a positive food safety culture from farm to table and beyond.”

The center also aims to inform consumers’ food choices by raising awareness about the scope and impact of foodborne illnesses; to shift the paradigm by promoting an integrated, systems-based approach to food safety, food security, and nutrition; and to build strategic partnerships in order to advance these goals.

CFI will hold its inaugural event, “Translating science into policy and practice: What are the food safety priorities?”, on Nov. 14 and has established an endowment fund to help sustain the center’s work long-term.

To learn more about CFI and the endowment fund, visit foodsafety.osu.edu.