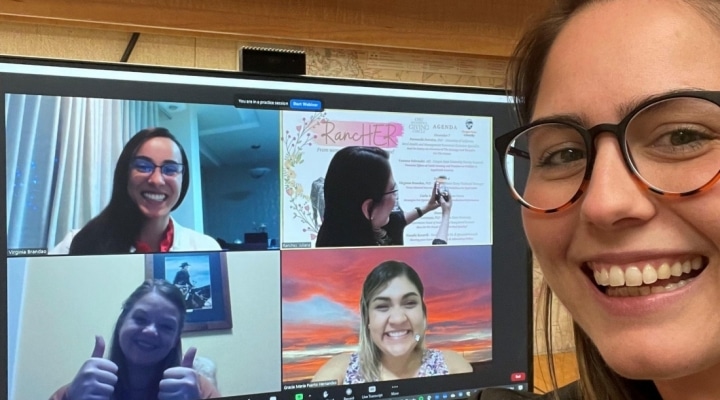 OSU Extension beef specialist Juliana Ranches takes a selfie in front of a computer screen that shows some of the women speakers at the RanchHer conference. (Courtesy Photo)

BURNS, Ore. – With the growing trend of women taking up beef ranching, an atmosphere of inclusion is sometimes elusive. Many women feel intimidated to interact with male ranchers.

“I always had the sense at every meeting I go to primarily men were attending,” said Juliana Ranches, Oregon State University Extension Service beef specialist. “If you’re in that environment, you’re the minority; it can be intimidating to ask questions because you’re a small fish in a big pond.”

Ranches, who is based in the Eastern Oregon Agricultural Research and Extension Center in Burns, planned a 2020 cattle field day but had to switch gears when COVID-19 hit. A grant from the OSU Women’s Giving Circle allowed her to put together an online conference in 2021 that featured all women speakers – two a day for three days. She called it RancHER.

“I know so many great women doing amazing research in the agricultural field, so I decided to have an event with all women speakers,” said Ranches who is also an assistant professor in the College of Agricultural Sciences. “So, I designed something to make women comfortable.”

More than half – 51% – of all farming operations in the United States have at least one woman operator, according to the 2019 Agricultural Resource Management Survey (ARMS). Ranches said the percentage continues to increase, especially as ranches are sold, consolidated or passed to the next generation.

“There’s a growing trend for women in the field,” Ranches said. “The person responsible for the cattle is more often a woman. It’s changing but slowly. I like being in the field as a woman. I feel lucky. I know some people have troubles. Sometimes we have less credibility, but that changes within a minute or two of conversation.”

Ranches’ all-female conference was one way to spread education designed to make women successful. It drew 120 ranchers, an average of 40-50 a day, a contrast to the 30 or fewer who attend her field days. Because it was presented in webinars, people could attend from anywhere and they did – from New Mexico, Nebraska, New Mexico, California, North Dakota and even Canada and Brazil.

One speaker, Fernanda Ferreira, Extension specialist with U.C. Davis School of Veterinary Medicine, talked about the innovative trend of using beef semen to breed dairy cows. In the dairy industry, there is usually a surplus of dairy cows that need to be bred and the use of beef semen on dairy has been shown to be a good alternative for producers. The practice has become popular in recent years.

Participants also learned how grazing and weather affect the sagebrush range land in eastern Oregon, an important topic in the state and beyond. Social media was another hot session, drawing the most people of all the offerings, Ranches said. Many of the women ranchers hesitate to use social media platforms like Instagram because they aren’t familiar with them, but it’s an excellent platform to advocate for the agricultural industry, she said.

The RancHER program, which Ranches plans to hold next year in person, if possible, was well received by the women who attended.

“It ended up much better than I anticipated,” Ranches said. “I got lots of compliments and people were excited about it. They want me to have it again. I’m happy about it.”

In another Extension initiative led by women for women, the Willamette Women’s Farmer Network has grown to 170 women farmers and friends. Extension small farms specialists Melissa Fery and Teagan Moran established the network in 2008, which features an e-mail listserv that is used to ask questions, seek advice, give information and plan gatherings.