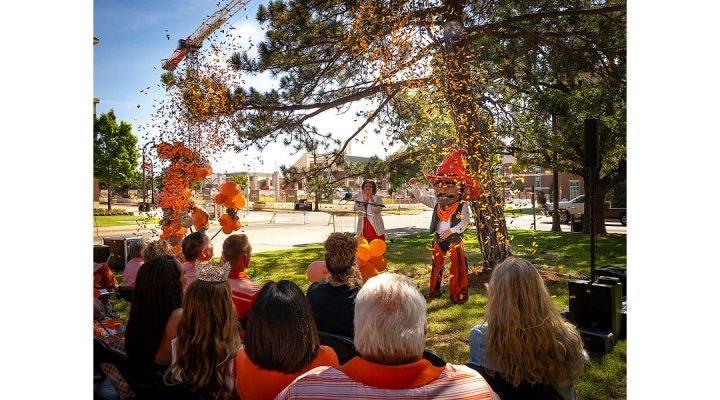 “This is a monumental day — a milestone for Oklahoma State University Agriculture, a pillar of the university, a door to possibilities and to progress,” Dr. Shrum said. “Our goal is to help feed the world. This new building will play a role in providing the hub of teaching and discovery, supporting one of the most successful agricultural programs in the world.”

New Frontiers is recognized as one of the fastest capital campaigns at OSU, surpassing its goal in less than three years. It also is OSU’s first academic capital campaign of this magnitude to reach its fundraising goal prior to the building opening.

“The success that we are celebrating today is a result of all our donors and supporters who believed in the vision for the New Frontiers Agricultural Hall,” Dr. Coon said. “It was the commitment and generosity of so many supporters who invested in the future of not only our OSU Agriculture family but also the state of Oklahoma.”

Joined by Pistol Pete, more than 100 donors, faculty, staff and students witnessed the raising of the OSU Agriculture flag on the construction site to celebrate reaching the fundraising milestone.