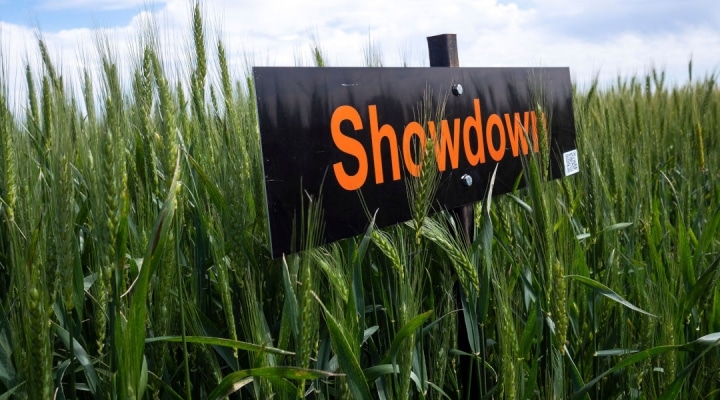 STILLWATER, Okla. — The Sept. 25 football game between the Oklahoma State University Cowboys and Kansas State University Wildcats is a competition that has a long and historic tradition, but a cooperative partnership between the two universities has been providing benefits throughout the region for just as many years.

The agriculture and natural resource sectors of Oklahoma and Kansas have many similarities, so it’s not surprising that a close working relationship has developed between OSU Agriculture and KSU, said Cheryl DeVuyst, head of OSU’s Department of Agricultural Economics.

“What might surprise people is just how close the connection is on so many different levels,” she said. “It’s not at all unusual for us to be visited in tandem when a student is looking to attend an agricultural college. OSU has a significant number of faculty who graduated from K-State, just as they have many who graduated from our Ferguson College of Agriculture. Then there are many high-profile research efforts and Extension programs that cross the border.”

The longtime collaboration between OSU Agriculture’s Wheat Improvement Team and their peers at KSU was featured recently on the agricultural television program SUNUP.

“Jagger is a wheat variety that was developed at K-State and tested extensively in Oklahoma,” said Allan Fritz, KSU wheat breeder. “We’ve tested OSU-developed varieties such as Gallagher and Doublestop. That has helped support those varieties being grown by Kansas producers.”

“We’re still competitive, but it’s a friendly competition,” Carver said. “We kind of push each other and play off each other. That’s ultimately good for producers and the wheat industry.”

Among the most impactful collaborative research projects is an ongoing multi-disciplinary study funded by the National Institute of Food and Agriculture. Scientists in the agriculture and natural resources fields are examining ways to increase water productivity, nutrient-use efficiency and soil health in rainfed agricultural systems of the semi-arid Southern Great Plains states.

Ochsner, who serves as principal investigator for the Oklahoma portion of the multi-state endeavor, has worked on several multi-million-dollar research grants with colleagues at OSU and KSU, which are both land-grant institutions.

“Being part of the land-grant system gives our participating faculty and staff a shared focus and goal,” he said. “At its core, the land-grant mission is to use scientific inquiry to help residents improve their quality of life.”

Agricultural land use accounts for more than 34 million acres in Oklahoma and nearly 46 million acres in Kansas. Both are among the nation’s leaders in the production of wheat and cattle, which has led to many cooperative studies and on-the-ground educational efforts by OSU Extension, OSU Ag Research and K-State Research and Extension.

Derrell Peel, OSU Extension livestock marketing specialist, has been a regular on K-State’s hour-long daily radio program Agriculture Today for more than a decade, much to the benefit of listeners throughout Kansas, the northern third of Oklahoma and parts of Colorado and Nebraska, said Eric Atkinson, professor and agriculture director for the K-State Radio Network.

“It’s important to provide multiple perspectives about agricultural subjects of the day, and Derrell is recognized widely as one of the best when it comes to livestock markets and what they mean to the animal agriculture industry, producers and consumers,” Atkinson said. “We make every effort to have Derrell on as often as possible.”

Given so many similarities between the two state’s agricultural sectors, it’s little wonder that OSU-KSU cooperative efforts are evident in many OSU Agriculture departments, including frequent collaborators in Plant and Soil Sciences, Animal and Food Sciences, Biosystems and Agricultural Engineering, Agricultural Economics, Natural Resource Ecology and Management and more.

Land-grant universities are responsible for teaching, research and Extension programs as authorized by the Morrill Act of 1862, the Hatch Act of 1887 and the Smith-Lever Act of 1914, with amendments.