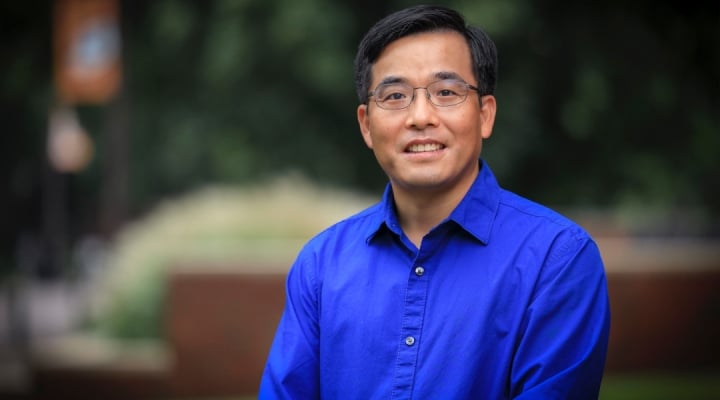 STILLWATER, Okla. — Oklahoma State University’s Glenn Zhang has been named the 2021 recipient of the Sarkeys Distinguished Professor Award by the OSU Division of Agricultural Sciences and Natural Resources.

The annual Sarkeys award recognizes outstanding academic leadership and contributions to the agricultural industry through teaching, research or Extension efforts. The award was established by the Sarkeys Foundation in 1980 to honor Elmo Baumann, an agronomist who worked with the foundation after his retirement from OSU.

Zhang is a professor in the OSU Department of Animal and Food Sciences and holds the Ralph F. and Leila W. Boulware Endowed Chair. His accomplishments in research, teaching, student mentoring and professional service made him a strong candidate for the award, said Thomas G. Coon, vice president and dean of OSU Agriculture.

“Dr. Zhang is not only a leader in research but also an accomplished teacher, mentor and advisor,” Coon said. “He has gained international respect as a leader in animal health, and his research has potential to transform livestock production practices through the development of innovative antibiotic-free technologies.”

Antimicrobial resistance has become a major health crisis worldwide, and Zhang’s program is filling a critical need for novel, effective antibiotic alternatives in the animal industry, he added.

Zhang’s research group has discovered several classes of dietary compounds with a strong ability to boost animal immunity and disease resistance, and the technology has potential for commercialization.

An OSU faculty member since 2002, Zhang has received more than 45 grants totaling nearly $6.9 million. His research has been funded continuously through the U.S. Department of Agriculture’s National Institute of Food and Agriculture, National Institute of Health, Oklahoma Center for Advancement of Science and Technology and numerous other industry organizations.

In addition to his research, Zhang teaches classes related to biotechnology and animal molecular biology and has mentored nearly 30 graduate students and a number of undergraduate research scholars, many of which have gone on to early career successes. In the last five years alone, two of his graduate students were awarded nationally competitive predoctoral fellowships from the USDA, and two undergraduate research scholars received prestigious Goldwater scholarships.

Zhang said he was thrilled to be considered for the Sarkeys Distinguished Professor Award.

“The Sarkeys award will further boost my scholarly activities at OSU,” he said. “I pledge to provide strong leadership to support and promote various research and teaching programs in the OSU Department of Animal and Food Sciences and OSU Agriculture as well.”