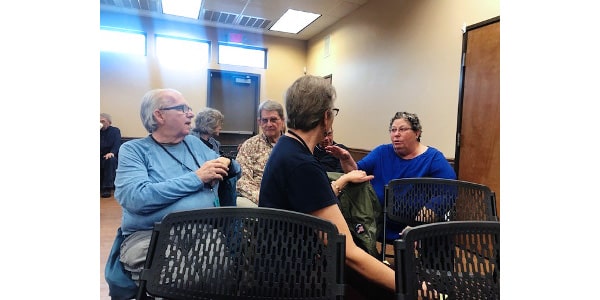 COLUMBIA, Mo. — From the streets of 19th-century London and the bench of the U.S. Supreme Court to a a backyard view of the stars, winter 2020 classes at Osher Lifelong Learning Institute span decades and topics.

More than 600 members take classes each year to stay connected and keep their brains active with Osher@Mizzou, a University of Missouri Extension continuing education program for adults 50-plus. The four-week winter semester starts Tuesday, Jan. 21, 2020, and includes 16 courses.

Back by popular demand is the TED Talks class led by Jeanne Dzurick. She selects a series of TED talk videos—short, engaging presentations about “ideas worth spreading”—that participants watch and discuss.

“It’s amazing that a relatively large group of people feel free to express their ideas, their beliefs and their stories with one another,” Dzurick said of her fall 2019 class. “I always learn something in every class—from the TED talk and from the Osher students attending.”

Dzurick says the lineup of TED Talks for the new semester ties into the theme of Osher’s 2020 academic year, “Innovations and Outliers: What Drives Change?”

Instructors often come to Osher after retiring from teaching. For example, Bill Bondeson taught philosophy at MU for more than 40 years and served on University Hospital’s ethics consultation team. His class will discuss medical ethics, a common topic during his university teaching career.

Hank Landry, who is new to the Osher program, is a retired Hickman High School history teacher. He will look at key events in early American history.

Many Osher members ask about the next semester’s lineup even before the current semester is over, eager to see what new instructors and topics are available.

“I have to limit myself on the number of classes I take,” said Jack Wax, chair of the Osher advisory council. “The topics are fascinating and the instructors—all volunteers—enjoy teaching as much as we students enjoy learning.”

Registration opens Jan. 7. A PDF of the winter catalog is available at osher.missouri.edu(opens in new window).

Osher is an MU Extension program seeking to build a community of lifelong learners. Members take classes, join clubs and attend events—all for the sheer joy of learning. Osher offers more than 75 noncredit courses over four semesters each academic year for mid-Missourians ages 50-plus. For more information, visit osher.missouri.edu(opens in new window) or call 573-882-8189.