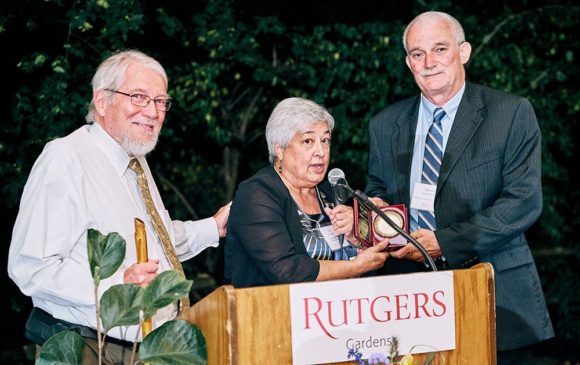 Liz Johnson, chair of the Rutgers Gardens Advisory Board, presenting Dennis Werner with the 2019 Hamilton Award. Executive Dean of Agriculture and Natural Resources Robert Goodman is at left. (photo provided by Rutgers University)

More than 100 Rutgers Gardens’ members and supporters, interns as well as Rutgers faculty and staff were in attendance to congratulate Werner as he received the Hamilton Award—the university’s national horticulture recognition—named for and inspired by Bruce “Doc” Hamilton, a well-recognized expert in ornamental horticulture who helped to shape the future of many students as well as that of the Rutgers Gardens.

Werner is renowned for breeding new fruit varieties and has more than two dozen cultivar releases to his name. He began a distinguished career in horticulture at NCSU in 1979 as an assistant professor in the Department of Horticultural Science, working his way up to full professor and a J.C. Raulston Distinguished Professor.

Liz Johnson, chair of the Rutgers Gardens Advisory Board, highlighted Werner’s accomplishments and his dedication to teaching before presenting him with this year’s Hamilton Award and an accompanying monetary prize. A selection committee, consisting of eight members representing various fields of professional horticulture, each year chooses a recipient for the Hamilton Award, which recognizes “an unsung hero, a quiet leader, or patient mentor in the field of horticulture.”

Rutgers Gardens, which celebrated its centennial in 2016, is one of the few botanical gardens in the U.S. that does not charge an entrance fee. It hosts a wide range of public activities to help provide support for the care of over 180 acres of both maintained and natural areas. In 2017, Rutgers Gardens was designated a Horticultural Landmark by the American Society for Horticultural Science, joining an elite group of horticultural sites like the New York Botanical Garden, Longwood Gardens and the United States Botanic Garden in Washington, D.C.

For a recap and additional photos of the event please click here!