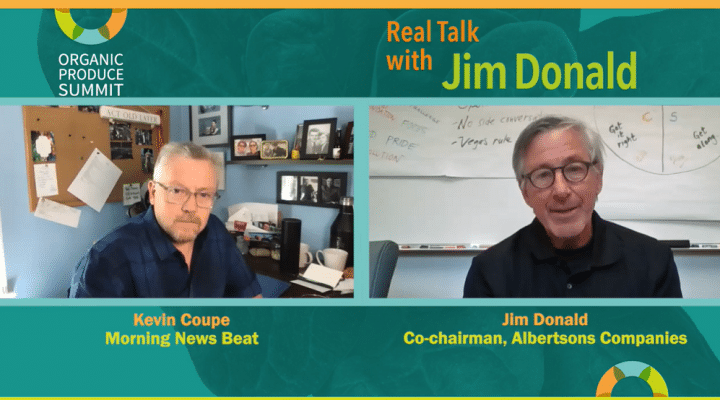 MONTEREY, Calilf. — Blockbuster sales of organic fresh produce and a spike of in-home eating will continue to propel strong retail growth over the next 18 months, according  to Jim Donald, Albertsons’ Companies Co-Chairman, in an exclusive virtual presentation for the Organic Produce Summit.

As part of  wide-ranging interview with Kevin Coupe of Morning NewsBeat, Donald highlighted the very essential role the supermarket industry is playing during these challenging times, the critical role of organics in retailer sales and commented on some of the keys to his own success.

Donald said organics at the 22 banners under the Albertsons’ umbrella have seen major increases this year and he expects the trend to continue. “Anything green and organic is blowing out,” Donald said, noting that organics continue to outpace its conventional counterpart in sales growth. The growth of organics shows no sign of slowing, Donald said, and “there is no ceiling at all” as to how high organic sales can go. He called organic produce “mainstream” and predicted it would continue to garner increased square footage at retail.

With huge organics sale gains top of mind during the ongoing pandemic, Donald credited those on the front lines of both the retail and supply community with keeping the supply chain moving. He also applauded the organic producers and suppliers for their commitment to provide fresh product on a steady basis during the pandemic. Donald attributed on-going and consistent communication as a key to how retailers are faring during these uncertain times. “Communication is the main ingredient in leading during a crisis and it is important to hear the leader’s voice every day,” he said. “Has communication improved during the pandemic? It has.”

Donald drew on his past experiences leading Starbucks and Walmart in understanding how retailers must react to consumer needs. “You’ve got to remember that no matter how big you get, no matter how many stores you have, you have to pretend you have one store, one employee and one customer and treat them as if they are the only one,” Donald said. The same theory, he said, applies to each SKU in the produce department. When selling organic produce, you should treat each produce item as if it is special and take extra care to merchandise it properly and if you do that “great things will happen.”

Using a variety of merchandising techniques at store level, including both co-mingling and separate sections, seems to work best in driving organic sales, Donald said. It takes a combination of both to get the job done and to support the category correctly. He also advocated the use of GS1 labels to make sure the product is being rung up correctly at the check stand and the organic data reflects that.

Donald said the current retail landscape is showing the strength of brick and mortar locations as well as the growing direct to consumer marketplace. “Brick and mortar remain as strong as ever, and we have shown that it can co-exist with e-commerce,” Donald said.

Speaking about his own success as a leader, Donald advocates leading from behind. He said the instinct of a great leader is to support their front-line personnel. For the retail supermarket business, he said nothing is more important than those 98 percent of employees that have direct contact with the customers.

Returning to the role of communication, Donald also reinforced the importance of consistent messaging and outreach in the success of any company. In fact, Donald believes the supermarket industry has never been better than it is today. He said grocery retailers have a history of dealing with crises and they have truly shined during the past few months. Donald noted that 40 percent of food purchased elsewhere (foodservice) went away from its normal channel and transitioned back to supermarket, with the industry able to absorb that business very well.

“All retailers have a better sense of urgency, and more respect for what the front lines do,” Donald said. “We are stronger as an industry than we were before this.”