Home » Organics in an era of inflation 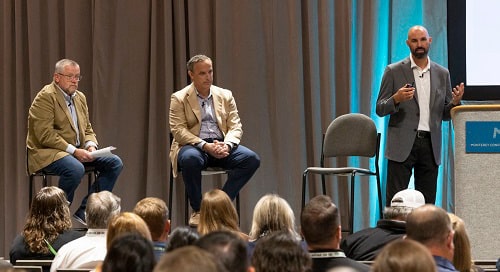 MONTEREY, Calif. — While the organic fresh produce industry has certainly felt the pangs of inflation, industry experts agree that there are other variables impacting organic sales in the second quarter of this year as well.

As part of the Organic Produce Summit 2022 educational program, Tom Barnes, CEO of Category Partners, and Richard Gonzales, VP of Global Produce Sourcing for Walmart, discussed how to adapt and grow in the era of inflation with moderator Kevin Coupe, founder of Morning News Beat.

Barnes kicked off the educational session with Q2 2022 Nielsen data that showed organic produce sales stood at $2.4 billion, up 3.7 percent from the same period last year. Volume, however, was down 2.8 percent, with 748 million pounds of organic produce sold.

“If we look at the 5-year comparison in dollars from Q2 2018 to present, we’re trending up. However, the volume is trending down over that 5-year period, with conventional off 2 percent and organics down 2.8 percent,” said Barnes.

“If you look across all of the categories, half of them [are] bucking the trend, and half of them are not,” said Barnes.

Gonzales noted that consumer behavior began changing in February of this year. “There was a shift to cooking at home, and people began thinking more about what they buy. Inflation has been here for a while, and I don’t think consumer behavior is going to change in a recession,” he said.

Barnes, in turn, said the industry needs to make sure there is a compelling reason for consumers to buy organic. “There’s a large percentage of fence sitters that swing between organic and conventional and look to quality and price to guide their decision. Look at your business and then at the numbers to see what you need to do,” he said.

In 2020, Gonzales said there was a clear drive by consumers to better manage their health, which resulted in a jump in organic produce sales—and retailers have responded. “The more supply, the more upside there is. It’s not just inflation. There are sourcing issues that cause prices to go up. The consistency of supply will help drive choices; if retailers know they will get consistent supply, they’ll allocate the space,” said Gonzales.

Barnes warned against volatile reactions to changing consumer behaviors: “We need to look down the road and not fall prey to knee jerk reactions,” he said. “Some retailers rely on higher price points, and right now they’re suffering; the foot traffic is going elsewhere. Should that retailer drop their prices and go value add? No, because that would be reactionary.”

“There will be a ceiling in the organic fresh produce industry,” said Barnes. “When we began, we saw conventional growers watching what they put on their crops. Organics helped the industry, and it’s still a huge upsell for retailers. We can’t go backwards. However, can we go forwards in the next six months to a year? It will be a tough road home for organic growers and shippers. We need to make sure it’s available for the right price. We don’t want to drop our prices to match conventional, but we need to look at conventional and then figure out where the price gap should be while ensuring we tell our consumers the right story.”

Barnes said prices are trending up in both categories. In Q2 2022, conventional was up 9.3 percent and organic was up 7.2 percent. “The prices are all going up, but the gap between the two is still decreasing. It’s important to have this gap. There are retailers that want to push that price down to parity with conventional; it doesn’t have to go there.”

Gonzales said opportunities exist to attract more organic customers. “There is a lot of opportunity with mid-market and price-sensitive buyers, which accounts for 95 percent of market share,” he said. “They want more organics, but they’re not sure if they can afford it, or maybe it’s not available. This is everyone’s customer, no matter which retailer you are. The question becomes: how do we get them more organics in a way that’s consistently cost-effective?”

USGC elects board of directors