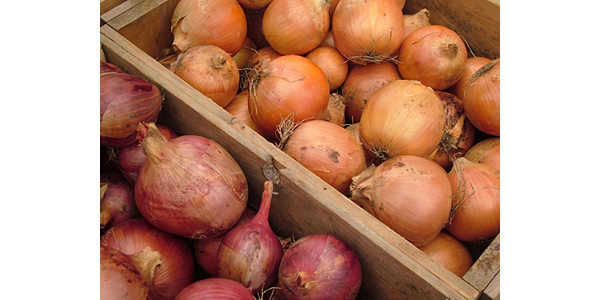 Researchers have found that flavonoid levels and antioxidant activity in organic onions are higher than in conventional onions. (Mark Goebel via Flickr)

WASHINGTON — Five years ago, a highly publicized meta-analysis of more than 200 studies concluded that organic food was no more nutritious than conventionally grown food. Since then, however, additional work has suggested the organic foods contain more health-benefiting phytochemicals. Now, researchers have found that flavonoid levels and antioxidant activity in organic onions are higher than in conventional onions. Their investigation, in ACS’ Journal of Agricultural and Food Chemistry, is the longest-running study to address the issue.

The authors propose that the conflicting results from previous research on organic and conventional crops’ phytochemical content could be a function of short study periods and the exclusion of variables such as weather. To help address these factors, the researchers undertook a study from 2009 to 2014 of organic (per European Commission standards) and conventional “Red Baron” and “Hyskin” onions, which are rich in flavonoids such as quercetin. Some studies suggest that these flavonoids and others are beneficial for people with a range of health conditions.

Over the six-year study, measurements confirmed that weather could be a factor in flavonoid content, regardless of whether they were grown under organic conditions. For example, the levels of flavonols decreased in Red Baron onions from 2010, the year with the lowest temperatures, but increased in 2011 and 2014 when temperatures were higher and rainfall was down. The researchers also found that antioxidant activity was higher in both varieties of organic onions. And the flavonols in organic onions were up to 20 percent higher than in conventional ones.

— The American Chemical Society via EurekAlert

Earning a living in a changing climate