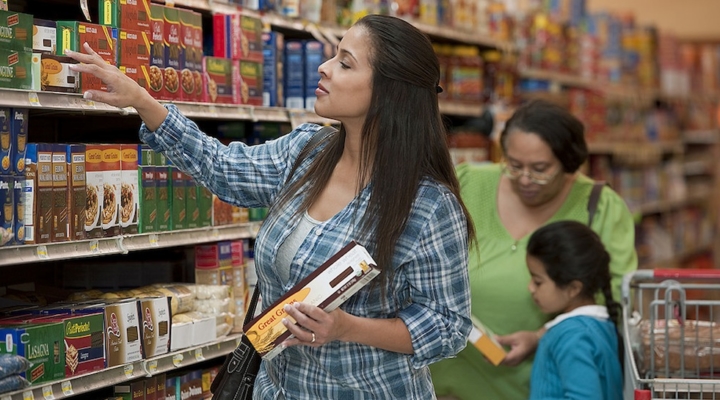 To gauge consumers’ willingness to pay for food labeled as GM vs. non-GM, researchers conducted a national survey of 1,132 respondents. (U.S. Department of Agriculture, Flickr/Creative Commons)

GAINESVILLE, Fla. — Consumers are confused between foods labeled as “organic” and “non-genetically modified,” according to a new study led by a University of Florida professor. In fact, researchers found that some consumers view the two labels as synonymous.

When Congress approved the National Bioengineered Food Disclosure Standard in June 2016, lawmakers allowed companies two years – until June 2018 – to label their genetically modified (GM) food by text, symbol or an electronic digital link such as a QR code. The QR code is a machine-readable optical label that displays information when scanned.

Besides QR codes, companies can label GM foods by adding words like: “contains genetically modified ingredients” in plain text on the packages, said Brandon McFadden, a UF/IFAS assistant professor of food and resource economics, and lead author of the study.

McFadden and Purdue University agricultural economics professor Jayson Lusk conducted their research to find the best ways to communicate whether a food has GM ingredients. This research has implications for which foods consumers will buy, McFadden said.

To gauge consumers’ willingness to pay for food labeled as GM vs. non-GM, researchers conducted a national survey of 1,132 respondents.

Specifically, researchers wanted to know how much consumers were willing to spend on food labeled as “USDA Organic” vs. that labeled “Non-GMO Project Verified.” Genetically modified material is not allowed in food labeled “USDA Organic,” while “Non-GMO Project” means the food has no more than 0.9 percent GM characteristics, according to the study.

Researchers measured respondents’ willingness to pay for a box of 12 granola bars and a pound of apples. Granola bars represent a manufactured food commonly differentiated by its absence of GM material, while apples are a fresh fruit that requires companies to tell if they contain GM material, the study said.

In this study, when consumers looked at packages of Granola bars labeled “non-GMO Project,” they were willing to spend 35 cents more than for the boxes that had text that read, “contains genetically engineered ingredients.” With the “USDA Organic” label, consumers were willing to pay 9 cents more.

In addition to willingness to pay for GM- and non-GM foods, researchers wanted to know how QR codes impact choices for foods labeled as containing GM ingredients. They also wanted to know how much consumers were willing to pay for food labeled as GM if that information came from a Quick Response – or QR – code. Study results showed consumers are willing to pay more for genetically modified food if the information is provided by a QR code.

“This finding indicates that many of the study respondents did not scan the QR code,” McFadden said.

“However, it is important to remember that this study is really a snapshot, and it is possible that over time, consumers will become more familiar with QR codes and be more likely to scan them,” he said.

The new study is published in the journal Applied Economics: Perspectives and Policy.