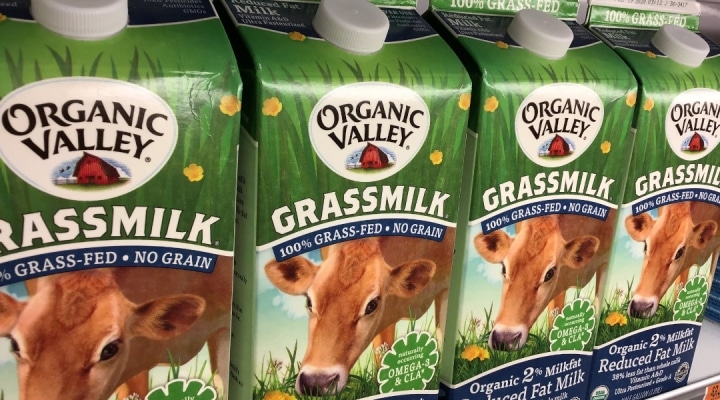 “A cooperative owned by small family farms is the perfect fit for us,” George Osgood said in a statement distributed by Organic Valley. “It gives us the chance to keep doing what we love.” (Mike Mozart, Flickr/Creative Commons)

LaFARGE Wis. — An international organic milk cooperative is offering membership to 80 small organic farms in the Northeast that were poised to lose the market for their milk, Wisconsin-based Organic Valley cooperative announced Tuesday.

Organic Valley, based in LaFarge, Wisconsin, announced on Tuesday that 10 small Northeast farms have already been accepted membership in the cooperative.

Among the 90 farms are dozens in Vermont, including the Osgood Family Farm of Corinth, Vermont.

“A cooperative owned by small family farms is the perfect fit for us,” George Osgood said in a statement distributed by Organic Valley. “It gives us the chance to keep doing what we love.”

Last summer, Danone, the parent company of Horizon Organic, announced it would stop buying milk from 28 farms in Vermont and a total of 61 in Maine, New Hampshire and New York. The deadline was originally set for August, but it was later extended to February 2023.

In addition to the 90 farms covered by Organic Valley, Stonyfield Farms, another organic dairy, will be extending offers to five farms, according to Stonyfield spokeswoman Kristina Drociak.

It’s unclear how many of the remaining farms are still without a market for their milk.

The news last year that scores of organic dairies were set to lose their markets left the farmers and state agriculture officials scrambling to find other places to sell the milk.

The Vermont Agency of Agriculture Food and Markets created a task force to seek a solution to the loss of the markets.

“Today’s action by Organic Valley is the outcome that we hoped for when we created the task force,” Vermont Agriculture Secretary Anson Tebbetts said in a statement. “Now we must build upon this development and make sure we continue to secure a long-term market for farmers.”

“This is outstanding and welcome news for Maine’s organic dairy farmers, many of whom have been worried sick about what comes next after Horizon pulled the rug out from underneath them last year,” Mills, a Democrat, said in a statement.

Organic Valley describes itself as the largest farmer-owned organic cooperative in the U.S. It represents about 1,700 farmers in 34 U.S. states, Canada, Australia, and the United Kingdom.

Organic Valley CEO Bob Kirchoff said that with the help of consumers and customers across the country they are helping to solve what many consider to be a crisis of disappearing small family farms.