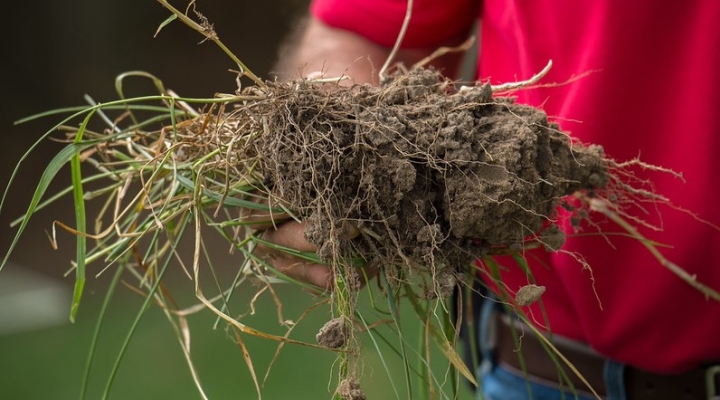 "With growing interest from farmers in being able to harness and exploit soil health, this research really helps us to get to the point of being more and more prescriptive about it," said Kyle Wickings, associate professor of entomology and co-author of the study. (Stock photo via U.S. Department of Agriculture, Public Domain)

ITHACA, N.Y. — Prior organic farming practices and plantings can have lasting outcomes for future soil health, weeds and crop yields, according to new Cornell University research.

The study recently published in the journal Agriculture Systems also breaks down how specific components of soil health – such as the abundance and activity of soil animals and soil stability – affect crop productivity.

“With growing interest from farmers in being able to harness and exploit soil health, this research really helps us to get to the point of being more and more prescriptive about it,” said Kyle Wickings, associate professor of entomology and co-author of the study.

Also, the study reinforced the understanding that soil animals, such as mites and other tiny critters living in soil, play critical roles in soil health and crop productivity.

Soil animals are known to break down crop litter while indirectly affecting microbial communities in the soil. The researchers’ new findings suggest that measurements of soil invertebrates can inform assessments of soil health.

“When I think about crop management, nutrient amendments are not going to be the limiting factor [in crop productivity] for farmers in the U.S.,” said Ashley Jernigan, a graduate student in Wickings’ lab and the paper’s first author. “Really, we need to be optimizing these biotic processes in our soil and focusing more on biotic measurements.”

The study is important because unsustainable farming practices are depleting soils of biological activity and nutrients, leading to widespread concern about farmers’ ability to grow enough food to keep up with global population growth.

In 2005, researchers started the Cornell Organic Grain Cropping Systems Experiment at a Cornell research farm in Aurora, New York. The experiment compared four cropping systems that varied in fertilizer inputs, tillage practices and weed control. Then in June 2017, the entire site – including the alleyways between plots – was plowed and seeded with sorghum sudangrass, to understand the long-term effects of previous management practices. By September that year, the researchers were gathering data on such things as soil invertebrate abundance, community structure, and weed and sorghum sudangrass biomass.

Overall, they found that past nutrient inputs, how much soils had been disturbed, weed management and the preceding crop all produced lasting effects. For example, plots that had been managed with a reduced tillage system generally had better overall soil health, especially when looking at microbial activity. And plots under an enhanced weed management system had less impressive soil health, but better weed control.

They also looked at the alleyways between plots, where the soil health was very good due to a lack of soil disturbance. That led to a very high diversity of soil invertebrates.

Jernigan developed and ran statistical models to examine relationships driving future crop productivity across all the cropping systems. While strong science informs farmers about proper nutrient levels needed for crops, modeling results revealed that crop production is limited by factors such as microbial activity and soil aggregate stability (the ability of soil particles to stay clumped together for retaining air and water). And the model showed that soil invertebrates play important roles possibly by grazing on microbes, thereby stimulating microbial activity in soils.

Farm Bill signed into law one year ago