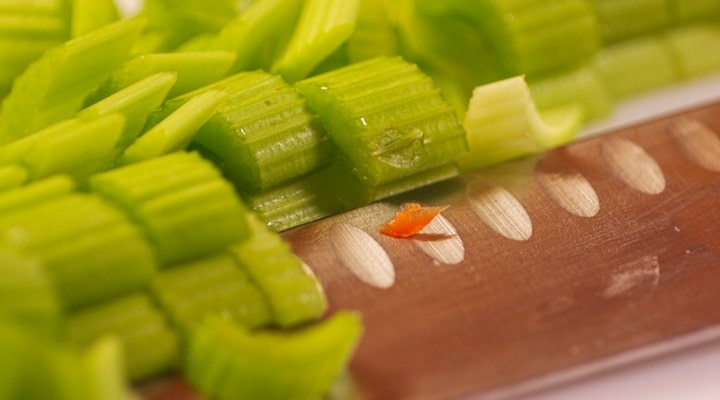 The tight organic celery market is expected to continue at least through May and into June, Boskovich Farms director of organic sales Darrell Beyer said. Unfortunately, he also believes the weak market on most other organic vegetables will also continue well into summer. “It always gets slow in the summertime but usually not this early. We usually don’t see these [weak] markets until after the Fourth of July.”(pepperberryfarm via Flickr/Creative Commons)

MONTEREY, Calif. — For a variety of reasons, most western vegetable crops—both organic and conventional—are experiencing a supply-exceeds-demand situation. One exception is organic celery.

“Organic celery is good right now … if you have any,” quipped Darrell Beyer, director of organic sales for Boskovich Farms, Oxnard, CA.

Boskovich is about 10 days away from opening two Oxnard-area fields, Beyer said, in time to take advantage of the strong market. The current market of $30 for a crate of celery is indicative of little nice quality product available. “We are starting to cut, but right now we are only producing 10, 15, 20 pallets a day,” Beyer said.

The tight organic celery market is expected to continue at least through May and into June, Beyer said. Unfortunately, he also believes the weak market on most other organic vegetables will also continue well into summer. “It always gets slow in the summertime but usually not this early. We usually don’t see these [weak] markets until after the Fourth of July.”

Sammy Duda, president of Duda Farm Fresh Foods, Salinas, CA, said the weak markets across most organic and conventional vegetables are the result of ideal growing conditions and logistics challenges. “You usually have some production interruptions that help the market. We haven’t had any. We have had a cool, dry winter and great spring with no rain,” he said. “Look at the fields; they are absolutely gorgeous.”

Sky-high truck rates also lessen demand for West Coast product, Duda said. The long-time produce executive admitted to being a bit perplexed that organic celery is not following the same pattern as most every other West Coast vegetable as it was grown in the same great conditions. “It is tight right now, and I’m not quite sure why,” he said.

Richard Uchida, sales manager for Duda, confirmed that organic celery is a relatively hot market in the $20-$30 range. He expressed the same surprise as Sammy Duda, noting that their organic celery fields, which are currently in Oxnard, are producing well. “We do see a shortage overall, but we have pretty good supplies,” Uchida said.

Looking ahead, Uchida said regional deals across the country for organic celery and all the other vegetable items will probably kick in around the end of June, with the potential to further depress weak markets and wipe out good ones like organic celery. Buyers will be hard-pressed to stay with West Coast product in the face of crazy-high transportation rates.

Sammy Duda is apprehensive of just how high freight rates will go as the summer progresses. He said California’s vegetable production does wane in the summer months, but the increase in summer fruit shipments from the San Joaquin Valley more than makes up for that, which should keep trucks in a demand-exceeds-supply situation.

Luke Patruno, who is involved with organic sales for Deardorff Family Farms in Oxnard, also commented on the organic celery situation. “We do have supply … some supply that is. Demand is once again outpacing the pent-up need from what has been a more than difficult transition,” he said. “Weather patterns slowed local growth, and we ended up about a week behind the anticipated starting date.”

He added that typically the desert deal and the growing deal in mainland Mexico will overlap with production in the Oxnard Plains creating a smooth transition. “But that was not the case this year. Consequently, pricing just shot through the roof.”

But Patruno believes the market has reached or is near its peak. “The product we are harvesting is clean with good color and nice heavy weight,” he said, adding that better supplies over the next few weeks should moderate the pricing structure, though he expects demand to remain strong.

Another perspective on the organic celery market was provided by Heather Fuller, vice president of sales for Braga Fresh Family Farms/Josie’s Organics, Salinas, CA. “The organic celery market has been active, especially on full-size cartons. Industrywide, there have been reports of seeders and aphid pressure leading to lower yields. This coupled with strong demand has kept the market tight.”

She added that several growing areas are in transition, with Braga preparing to move into the Salinas Valley in early June. “We currently have supply from both Mexico and Santa Maria. Mexico will finish up in the next 10 days,” she said this week. “We expect strong market conditions to continue through mid- to late June when volume will start to increase.”

Opinion: Agricultural workers’ rights bill will harm those it purports to help