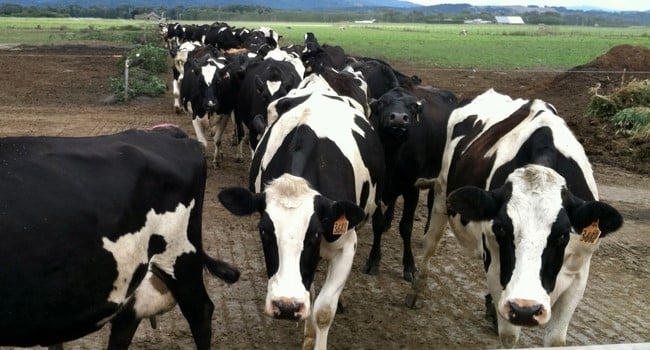 Dairy cows stroll in from the pasture to be milked in Humboldt County. Organic cow milk brought California dairies $251 million of revenue in 2016. (UC ANR)

DAVIS, Calif. — Organic farming continues to expand in California and now includes more than 360 commodities, according to a new University of California report. The number of organic growers, acreage and farm gate sales revenue is reported by commodity, county, region and statewide in the new “Statistical Review of California Organic Agriculture, 2013-2016.” The data are collected from farms that register as organic with the California Department of Food and Agriculture.

“This report highlights the incredible diversity and abundance of organic crops being grown across so many different geographic regions in the state, which reflects California’s leading role in this production sector,” said Houston Wilson, director of the new UC Organic Agriculture Institute.

Dairies continue to lead by value of organic production, noted Rachael Goodhue, UC Davis professor of agricultural and resource economics and coauthor of the report.

The number of organic growers in California jumped from 2,089 in 2013 to 3,108 in 2016. The top 10 organic commodities for sales value in 2016 were cow milk, strawberries, carrots, wine grapes, table grapes, sweet potatoes, almonds, raspberries, salad mix, and chicken eggs.

“This review is critical to understand the changes in the fast-growing organic agriculture sector in the state where more than 50% of the nation’s organic vegetables and fruits are produced,” said Joji Muramoto, UC Cooperative Extension organic production specialist at UC Santa Cruz and coauthor of the report. “It provides statistics of all organic commodities produced across the state as well as at county level. This is the primary reference to learn about the size, diversity, and trends of organic agriculture in the state.”

In 2016, California organic sales were $3.1 billion with an average of $1 million in sales per farm, but revenue varied widely among farms. For example, San Diego County had the most organic growers (313) in 2016, but Kern County’s 47 organic farmers earned the most in total organic sales: $381 million on 49,727 acres, excluding pasture and rangeland, according to Muramoto.

The last report published by Klonsky, who passed away in 2018, covered 2009-2012. All previous organic agriculture statistics reports can be accessed at https://aic.ucdavis.edu/research1/organic.html.

“This report of organic data continues the series of studies initiated by Karen Klonsky many years ago. It contains vital summary information for industry and policymakers as well as researchers,” said Goodhue.

“Accurate annual data on California organic crop production, acreage and value is critical to understanding the scale and scope of this growing agricultural sector,” said Wilson. “As the UC Organic Agriculture Institute begins to develop research and extension programs, it is important that we have a reliable way to assess the extent and geography of organic production as well as track changes over time.”

More recent years are not included because the data collected by CDFA changed in 2017 and again in 2019 so they are not comparable to the data in this report.

UC Agriculture and Natural Resources brings the power of UC to all 58 California counties. Through research and Cooperative Extension in agriculture, natural resources, nutrition, economic and youth development, our mission is to improve the lives of all Californians. Learn more at ucanr.edu.