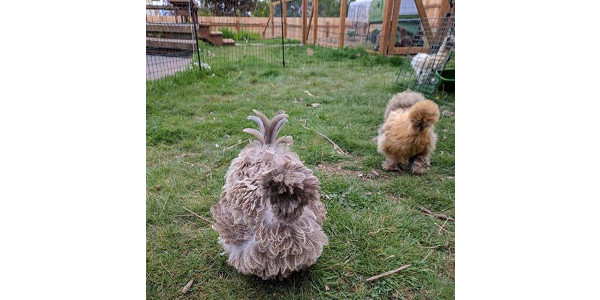 Evelyn the hen was recently named Miss Fancy Feathers in the Purina® Miss Flock-Tober® contest. Brent Rueff of Astoria, Ore. entered the photo of Evelyn, to compete against hundreds of beautiful hens. (Courtesy of Purina)

ARDEN HILLS, Minn. — A backyard chicken in Astoria, Ore. has been named Miss Congeniality in the Purina® Miss Flock-Tober® contest. Local flock raiser Brent Rueff of Astoria entered to compete against hundreds of beautiful hens to earn this honor.

“Evelyn is a Frizzled Satin Showgirl,” he says. “She has climbed her way to the top of the pecking order in my Silkie flock, but she rules in a benevolent manner. People often look at her and have no idea which end they’re looking at.”

Miss Flock-Tober®, hosted by Purina Animal Nutrition on the Purina Poultry Facebook page, celebrates beautiful and healthy hens during this annual contest. Rueff, who has a flock of 16 chickens, submitted a photo of Evelyn. As the winner of this round, Evelyn, who loves mealworms, watermelon and grit, is now in the running to win the ultimate title of Miss Flock-Tober® 2018, with the grand prize being a year’s supply of Purina poultry feed.

Rueff follows in the footsteps of his grandmother and great-grandmother, who were also dedicated chicken raisers.

“My grandma had backyard chickens in the 80’s, before it was popular or even acceptable,” Rueff says. “So, as a kid, I was around a lot of chickens. I’ve always known I wanted to have chickens, but I’ve only had my flock for a year or so.”

Rueff loves all his hens, but he’s partial to his Silkies. His flock has become a source of satisfaction and fun.
“I love most everything about keeping chickens, but my favorite thing is how much life they bring to my backyard,” Rueff says. “They are so much fun to watch and interact with. They really are a source of endless entertainment.
The top entry in each round of the Miss Flock-Tober® contest will move on to the finale round, which begins October 22.

To learn tips for starting a backyard flock, visit www.purinamills.com/chicken-feed or connect with other flock raisers on Facebook or Pinterest.