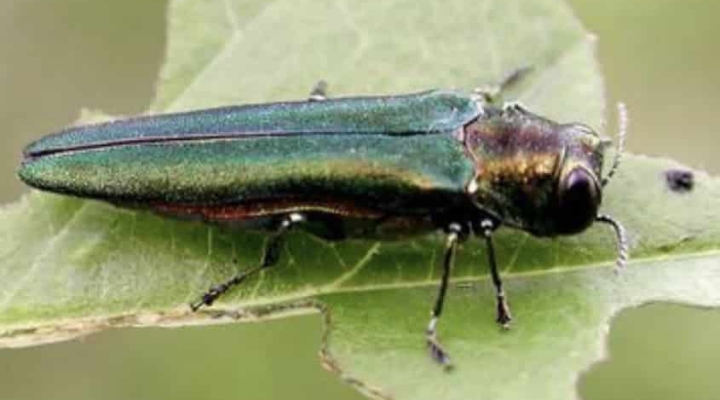 "When my kids arrived, I asked them to look for adult beetles,” said Dominic Maze. “My son promptly found one crawling on him. Knowing how many millions of ash trees across the country these beetles have killed I felt like I was going to throw up.”

FOREST GROVE, Ore – On June 30, Dominic Maze, an invasive species biologist for the City of Portland, was waiting outside a summer camp in Forest Grove to pick up his children when he noticed several ash trees in decline. When he took a closer look he recognized the distinctive D-shaped holes made by adult emerald ash borers (EAB), an invasive and destructive pest, as they exit an infested tree.

“When my kids arrived, I asked them to look for adult beetles,” said Maze. “My son promptly found one crawling on him. Knowing how many millions of ash trees across the country these beetles have killed I felt like I was going to throw up.”

Maze’s discovery of EAB in a parking lot in Forest Grove is the first known sighting on the West Coast. Maze was familiar with EAB and signs of it in ash trees through educational materials federal and state agencies have been providing to Portland and other Oregon cities. He immediately called the Oregon Department of Forestry’s (ODF) Forest Health Unit to report the EAB sighting.

ODF Forest Entomologist Christine Buhl drove to the site that same day and identified an adult EAB, known for their metallic, shiny green color. She then alerted the Oregon Department of Agriculture (ODA). Her identification was verified later by two additional invasive species specialists – Max Ragozzino with ODA and Wyatt Williams with ODF.

State officials are asking the public to learn what an emerald ash borer looks like and to report any sightings online at the Oregon Invasive Species Council hotline. This will help the state know how far and how fast this destructive insect is spreading in Oregon.

EAB is native to eastern Asia and has spread to about three dozen states since its first detection in Michigan two decades ago. EAB is now considered the most destructive forest pest in North America. Although harmless to people, pets, and animals, it has proven deadly to all ash species in North American and Europe, including the native Oregon ash (Fraxinus latifolia). EAB can also infest American fringe trees (Chionanthus virginicus) and European olive trees.

The infested ash trees in Forest Grove were cut down and chipped within 48 hours of discovery. ODF and ODA are now working closely with industry partners, including urban foresters and nursery producers, to provide information and resources as Oregon launches a response to the discovery of EAB.

The state is using the Emerald Ash Borer Readiness and Response Plan for Oregon as a guide in its response. The plan was finalized in March 2021 and created through the collaborative efforts of a diverse group of stakeholders and state agencies. The state will be consulting with local and federal governments and providing updates to the public and industry as it moves through its response efforts.

Webinar on food ingredients in the Japanese market

Waterhemp is here, is Palmer amaranth next?