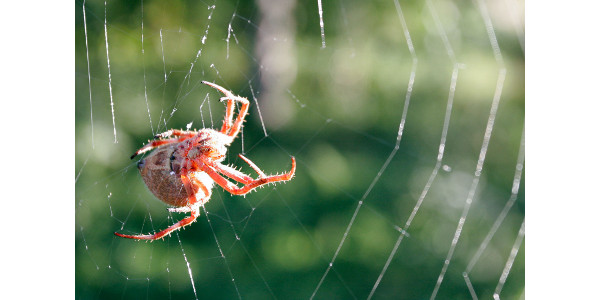 Orb weaver spiders are hard to miss, but harmless to humans and pets. (Courtesy of UW-Extension)

MADISON —Zoey Rugel: Orb weaver spiders near your home. Today, we’re visiting with P.J. Liesch, Department of Entomology, Insect Diagnostic Lab, University of Wisconsin-Madison/Extension, in the College of Agricultural and Life Sciences and I’m Zoey Rugel. So, PJ, what are these big, bright yellow and orange spiders I see hanging around my house?

PJ Liesch: So, this time of the year, we have a very common group of spiders we call orb weaver spiders and they’re very conspicuous. They’re hard to miss. They can often be a very good size. Including their legs, they may be an inch, inch and a half long and they have a very plump, round, bulbous abdomen, often bright yellows, oranges, reds and they can have some very unique markings on the body, too, that really catch your eye: cross signs, symbols of four-leaf clovers, and things like that, and there’s a number of species out there, so they can be very, very common this time of the year and that has to do a little bit with their life cycle. It turns out that orb weavers go through the winter as the egg stage and then those eggs hatch. In the spring months, we get our young spiderlings that go about doing their thing. They’re feeding and growing and developing and they’re probably going unnoticed at that point. They reach maturity in late summer and early fall and these are very, very conspicuous at this point in the year and very common. Often, the females are the ones that are noticed, because they sit in very conspicuous webs on sides of homes or out in your garden and they’re just sitting there catching prey and occasionally a male will come up to mate with them. In general, the orb weaver spiders they often like to make their webs in open areas. Sometimes you’ll see them on homes, probably because if they’re hanging out on a porch, where a porchlight is, you’ll have lots of insect prey coming into those areas. So, it’s a good spot for them to set up shop, so to speak. They’ve got a lot of moths and beetles coming into their webs that they can then catch and feed upon.

Zoey Rugel: Are they harmful for people?

PJ Liesch: Really, they’re not. They can look a little intimidating, because they can be definitely good-sized spiders and catch your eye, but overall, they’re really harmless to people and pets. Most chances, if you try disturbing them, their first instinct is to run away and hide and to get away from you. They probably perceive you as a threat, but in terms of biting, you’d probably have to work at it to be bitten by these orb weaver spiders.

Zoey Rugel: What’s the best way to manage them?

PJ Liesch: Well, for the most part, because they’re harmless to people, you probably don’t have to really be concerned about them. If you’re really not a fan of having these spiders around, maybe you have one by your front door, you could always catch it in a container and release it elsewhere out in the yard and it’ll probably set up shop elsewhere. Otherwise, you could physically remove them. Use perhaps the hose attachment on a vacuum cleaner. In theory, you could spray for them, but again they’re really pretty harmless. So, there isn’t a whole lot of need to spray for spiders.

Zoey Rugel: We’ve been visiting today with P.J. Liesch, Department of Entomology, Insect Diagnostic Lab, University of Wisconsin-Madison/Extension in the College of Agricultural and Life Sciences and I’m Zoey Rugel.