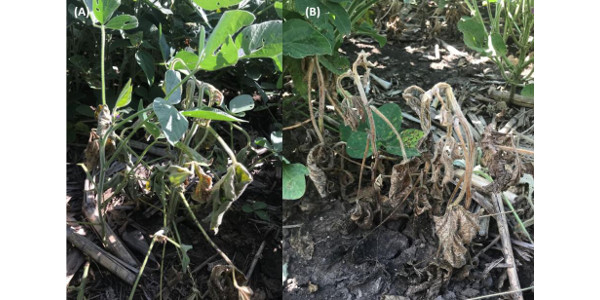 Figure 1. Soybean plants exhibiting signs of wilting (A) and necrosis (B) in fields in eastern Nebraska. (Courtesy of University of Nebraska-Lincoln)

LINCOLN — In late June we began receiving reports from a number of consultants, growers, and extension educators who were observing dying soybean plants (Figure 1) in fields across eastern Nebraska. These soybean plants typically have dark discolorations near the soil surface (Figure 2) that can extend up to the unifoliate node. The symptomatic plants easily snap off near the soil surface and orange to white maggots are often found feeding within the darkened area of the plant.

Orange gall midge is not a new insect to soybeans in Nebraska. Tom Hunt, Keith Jarvi and Bob Wright reported on the orange gall midge in a CropWatch article from August 2011 with some small isolated cases mostly associated with soybean plants that had some type of mechanical damage earlier in the season. Sporadic and isolated cases of orange gall midge have occurred over the last few years, but in all cases it appeared to be associated with a pathogen or damage and wasn’t considered a primary pest of soybeans.

This year we’re tracking a number of soybean fields where orange gall midge was reported in late June through early July. These infestations are much earlier than had been reported historically, raising concerns about yield losses in soybean fields. In late June infested soybean plants were already showing signs of necrosis and wilting with the greatest frequency of damaged plants occurring at the field edge. Randomly selected symptomatic plants from the field edge had an average of seven maggots per plant with the number of maggots and frequency of infested plants declining rapidly with distance from the field edge. Field samples found infested plants were still present over 100 feet into the field. Soybean fields exhibiting these symptoms have also been reported in northeast Nebraska, eastern South Dakota, and Iowa.

Little is known about the orange gall midge. Nebraska, South Dakota and Iowa researchers are currently attempting to rear adults from the maggots for species identification. In Nebraska, we’ve repotted infested plants from the field and placed them in a greenhouse with cages to capture the adults. In addition, we’ve also placed cages on infested plants in the field. Some adult midges have recently emerged from the repotted soybean plants in the greenhouse and we’ve transferred them to healthy and mechanically damaged soybean plants to see if we can recreate the symptoms. It is still not known if these midges are associated with orange gall midge. If emergence and adult numbers continue to increase, we will submit these specimens for identification.

Many growers and consultants are asking us how to manage this pest. As of now, we don’t recommend applying any pesticides to fields due to the following factors. First, it’s unclear whether orange gall midge is responsible for the damage observed in soybean plants or if it’s a secondary pest. Mounting evidence is suggesting that orange gall midge may have a role in the damage. Second, pesticides are not likely to control the maggots that are feeding inside the stem. Lastly, it’s not known when adult orange gall midges emerge or the duration of emergence in soybean fields. Such factors are critical for determining if any economic returns will occur from a pesticide application.

If you suspect orange gall midge damage in your field, please report it to us via email to justin.mcmechan@unl.edu to help us catalogue the distribution of this potential pest.