Home / Pennsylvania / Opportunity for increased dairy competitiveness
A new user experience is coming! We'll be asking you to login to your Morning Ag Clips account March 1st to access these new features.
We can't wait to share them with you! Read more here. 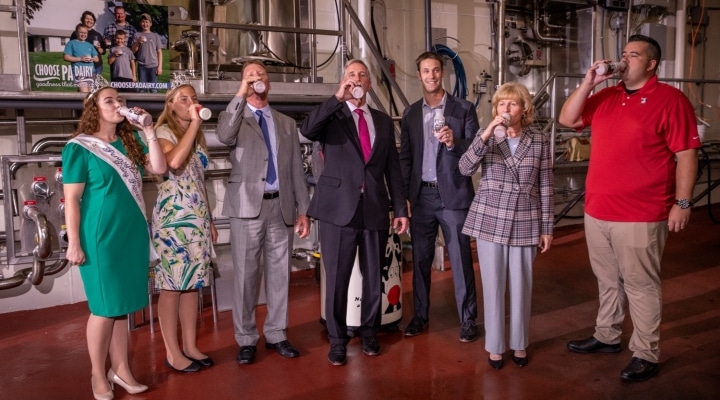 “Strengthening the dairy economy means strengthening consumer purchasing power of milk in the marketplace,” said Redding. “Act 62 provides consumer choice. It is a commitment to freshness and transparency that makes Pennsylvania dairy an easy choice for consumers. We are grateful to Senator Vogel for championing this legislation – it is a win for Pennsylvania dairy and one of the many achievements of the Dairy Future Commission.”

Introduced by Senator Vogel as Senate Bill 434, Act 62 amends Title 3 of the Pennsylvania Consolidated Statutes, in food protection, providing for both milk sell-by date and best-by date labeling. Prior to the amendment, milk followed a 17-day milk code that caused grocers and consumers to throw milk away after the 17-day sell-by date was reached. This caused viable milk to go to waste as food safety practices have proven to extend milk shelf life upward of 21 days.

With laboratory testing, dairy processors can now seek approval from the PA Department of Agriculture’s Bureau of Food Safety to label milk with best-by dates that more appropriately reflect shelf life on a case by case basis. 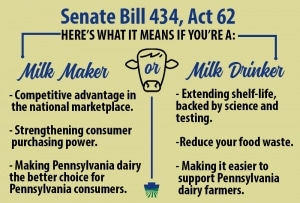 “Consumers rank freshness, as determined by the date code, as the most important attribute when purchasing milk,” said Senator Vogel, who serves as Chairman of the Senate Agriculture & Rural Affairs Committee. “Act 62 eliminated the arbitrary 17-day ‘sell by’ date requirement in favor of setting industry standards to provide realistic guidelines for determining milk’s actual shelf life. In addition, the law eliminated a barrier that made it extremely difficult for processors to bid to provide Pennsylvania milk to those who want to sell through national food suppliers and wholesalers.  Those suppliers typically require a longer “sell by” date interval, which prevented Pennsylvania farmers from receiving these contracts. Act 62 leveled the playing field to allow our dairy farmers to compete in the marketplace.”

Prior to Act 62, Pennsylvania milk was at a competitive disadvantage on store shelves, as out of state milk, extended shelf life milks and plant-based beverages printed longer codes in accordance to their state regulations. With open codes, choosing Pennsylvania dairy becomes an easy choice for consumers for both freshness and locality.

Harrisburg Dairies is a member of the PA Preferred® statewide marketing programming, whose mission is to provide farmers and agribusinesses with a brand identity for the products they grow and produce. It is an assurance to consumers that when they purchase products with the PA Preferred logo, such as milk, they are directly supporting Pennsylvania farmers. In addition to looking for the PA Preferred logo, the Choose PA Dairy campaignOpens In A New Window encourages consumers to examine milk plant codes found on lids and labels. Codes that begin with “42” means the milk is processed in Pennsylvania and sourced predominately from Pennsylvania dairy farms.

The PA Dairy Future Commission, the result of Act 66, signed by Governor Tom Wolf in July 2019, was tasked with reviewing the status of Pennsylvania’s dairy industry and making recommendations to support a successful future. Its final reportOpens In A New Window, released to the General Assembly August 1, 2020, outlines recommendations to strengthen the dairy economy, including the amendment of the 17-day milk code to an open code.

“The recommendation to extend the milk code date beyond 17 days was among the first recommendations identified and strongly supported by Commissioners for its positive impacts of increasing consumer access to quality, nutritious milk and for making Pennsylvania’s industry more competitive,” said Brett Reinford, Dairy Future Commission Chairman. “With the passage of SB434, more than a quarter of the Commission’s 54 recommendations have seen momentum in the year since the report’s release. I’m both proud of and eager for the progress being made on behalf of our dairy farming families and the many people that rely on the industry every day in the commonwealth.”

The PA Dairy Future Commission has partnered with the Center for Dairy Excellence to track progress of the 54 recommendations. Within the first year of releasing the report, 10 recommendations reached completion, and 26 percent of recommendations have received action.

For more information about the Dairy Future Commission, visit agricutlure.pa.gov.

Test your knowledge on trichomoniasis