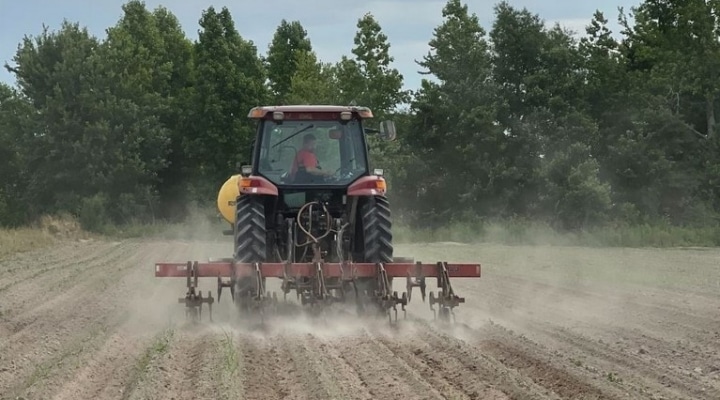 Farmer Chris Neal and his family grow 110 acres of butter beans on their farm, Carolina Butter Beans & Produce Farm, in Goldsboro, NC. They grow other crops like squash, okra, cucumbers, and sweet onions, but butter beans are their specialty, though, and folks in the South, this author included, love our butter beans. Growing the roughly 10,000 bushels of beans–equivalant to approximately 40,000 lbs.–a year is a family affair. (photo by Carolina Farm Stewardship Association)

PITTSBORO, N.C. — Farmer Chris Neal and his family grow 110 acres of butter beans on their farm, Carolina Butter Beans & Produce Farm, in Goldsboro, NC. They grow other crops like squash, okra, cucumbers, and sweet onions, but butter beans are their specialty, though, and folks in the South, this author included, love our butter beans. Growing the roughly 10,000 bushels of beans–equivalant to approximately 40,000 lbs.–a year is a family affair. Wendy, Chris’s wife, keeps the books and is a school teacher. Their two sons, Hayden and Will, are third-generation farmers in the making. Hayden, the oldest, works as the farm manager while he finishes his degree in agriculture. Will, the youngest, helps out with harvesting and running equipment when not playing sports for his school team. Just like Chris, both sons have expressed interest in following in the family footsteps.

“Farming is in my blood,” says Chris, who was raised in an agricultural community by grandparents who farmed. Ever since getting his start in the late nineties, Chris has been a passionate grower. Butter beans have proven to be a profitable niche crop for the family. “It’s uncommon and not something everyone grows because it takes specialized equipment,” says Chris.

Like many farmers, the COVID-19 pandemic has made selling their goods more challenging. The Neal’s had a brick-and-mortar shop, Downtown Fresh Market, in Goldsboro, North Carolina. They sold their crops, homemade products, and other locally-grown fresh produce from farmers and makers in Wayne County and the surrounding area. As most can imagine, it was difficult to keep their doors open. While they had to shut down their brick-and-mortar shop, the Neals were able to adapt and quickly launch an online store. Closing their physical shop meant a quick pivot and creative thinking for finding buyers for their products.

The online store has been a great way to reach existing and new customers. Always looking for new avenues to reach people, the Neals are currently working on an exciting project to outfit a concessions trailer to sell their produce and jarred items at fairs, festivals, and different market locations in and around Wayne County and the state. This kind of adaptability and exploration into new ways to market their goods led Chris and Hayden to explore the process of Good Agricultural Practices (GAP) certification for their farm.

Chris readily admits that pursuing GAP certification was a hard sell to get him on board. While he knew it might open up new markets and possibilities for selling his crops, he wasn’t sure it would be worth what seemed like a lot of extra work. Chris decided to look into the logistics and contacted Chloe Johnson, CFSA’s local food system manager, and is happy he did. “She was so helpful in guiding us through the process,” Chris says. “Her help and the programs of CFSA helped us get it done smoothly and under budget.”

While there is some extra paperwork he has to fill out to maintain certification, he feels it’s worth it for his farm because “it brought a lot of things to light that I didn’t know I needed. … I used to think it [GAP] was unnecessary, but it really is a good thing. It’s just common sense—making sure the food you produce is safe.”

GAP certification opened up wholesale markets to Chris, too. Many wholesale buyers who purchase for major grocers and distributors such as Whole Foods and Ingles Markets will not buy product from growers who are not GAP certified. “The grower-buyer meetings that Geoff (CFSA Market Access Coordinator) set up were great for us. Adding wholesale buyers has really helped keep our sales diversified,” says Chris.

When asked how much extra time GAP certification adds to his weekly routine, Chris stated he feels like it doesn’t cost any more in labor each week. The time he uses for GAP maintenance would have been spent doing something else less productive. Now, Chris feels the steps put in place with the GAP program make his whole operation more efficient. “I wish everyone would get certified to keep things clean.”

Chris sums up his feelings about working with CFSA best. “There’s not a book, class—whatever, that I could afford to buy that would equal the value I’ve gotten from the CFSA crew in being able to pick up the phone, ask a question, and get an answer that makes sense and helps my operation.” So, if you’re on the fence about whether GAP certification is right for your farm operation, contact the food safety team and get the conversation started. It might be the best next step for your farm.

Consider the cost: Deciding when to re-treat for BRD