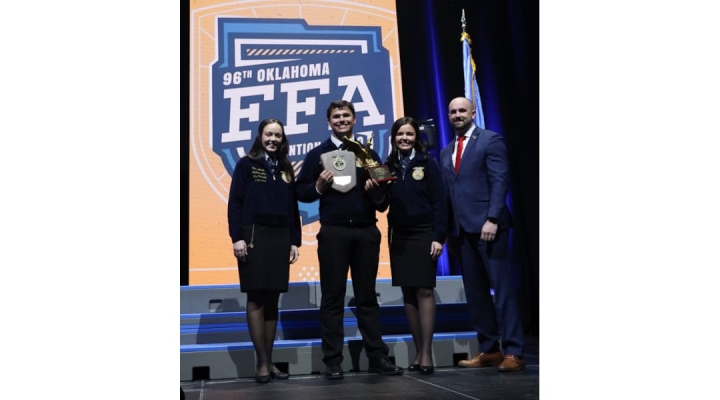 TULSA, Okla. — Larahmy Blakley of the Oologah FFA chapter was announced Oklahoma FFA State Star Farmer during the fifth session of the 96th Oklahoma FFA Convention and Expo on May 4 at the BOK Center.

“I have a very diversified farming operation in northeastern Oklahoma,” Blakley said. “I run 175 head of purebred cattle.

“I have a custom feeding operation that consists of about 40 head of mama cows, and I run winter stocker calves on wheat,” Blakley added. “I also have six sows and have a vegetable production SAE which consists of growing tomatoes, cucumbers, okra, onions and squash.”

The foundation of his multiple SAEs was built by his family, Blakley said. He remembers waking up Saturdays at 3:30 a.m. to help his mom set up at the Cherry Street Farmers Market.

“I wanted to carry on a family tradition.” Blakley said. “Growing up in the industry has had a positive impact on me and has taught me to have a good work ethic.”

FFA felt like an extension of his family, Blakley said.

“The blue jacket has made me feel at home ever since I put it on,” Blakley said. “Some of my favorite moments in my FFA career have been watching my SAE projects turn into something bigger. I have grown to know my programs, and I am excited to share them with other people.”

“From there, I will transfer to Oklahoma State University, where I will continue my degree in animal science,” Blakley said. “Then, I want to obtain a master’s in animal nutrition to become an animal nutritionist and come home to the family farm and operation.”

As Star Farmer, Blakley and the other State Stars over Oklahoma will each receive $23,673 in scholarships or capital grant funds through a $3.2 million gift from the Carl C. Anderson Sr. and Marie Jo Anderson Charitable Foundation. The late Carl C. Anderson, after whom the State Star awards are now named, was born in Naples, Oklahoma, in 1911. One of 10 children, he dropped out of high school to earn money and support his family. From those modest beginnings, the Anderson Corp. grew across the country as well as in Canada and South America.

FFA is an integral part of the Agricultural Education division in the Oklahoma Department of Career and Technology Education system. With more than 27,500 members and 366 chapters, the Oklahoma FFA Association is the fifth-largest state FFA association. The FFA mission is to make a positive difference in the lives of students by developing their potential for premier leadership, personal growth and career success through agricultural education. To learn more about the Oklahoma FFA, visit okffa.org.