Home / National / One (soil) test to rule them all
A new user experience is coming! We'll be asking you to login to your Morning Ag Clips account March 1st to access these new features.
We can't wait to share them with you! Read more here. 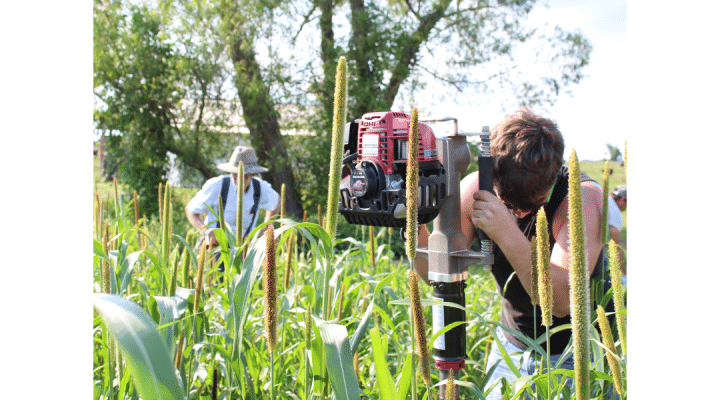 A graduate student from the Auburn team (foreground) collects soil cores for the study in 2018 while demonstrating to a farmer (background) about the collection process. Farmers can use soil tests to tell how much fertilizer to add or if nutrients might run off their fields. (Credit: Rishi Prasad)

WASHINGTON — The soil is a vital foundation for most plant life. Our crops rely on this rich trove of nutrients and microbes to help turn sunlight into food. But we’ve learned over the last few decades that there can be too much of a good thing.

While synthetic fertilizers have greatly increased the yield of crops, they have downsides too. When plants can’t absorb all of the nutrients from fertilizers, rain can wash them away. Spilling into streams, lakes and oceans, too much nitrogen or phosphorus leads to dead zones. Dead zones are areas of low oxygen that come as a result of rotting algae. That algae growth was boosted by a big gulp of fresh nutrients once meant for our crops.

If farmers know how many nutrients are in their soil, they can plan to add only what they need. The information can also tell them if their fields are at risk of losing nutrients to the water. That’s what soil tests are for. But just like how there is no unified power cord for all our tech devices, there are many different soil tests out there.

“The planet we live on has diverse groups of soils with different chemical and mineralogical properties,” says Rishi Prasad, a scientist at Auburn University’s Crop, Soil and Environmental Sciences Department. “Region-specific soil tests were developed in the past to meet the regional needs for agronomic fertilizer recommendation.”.

This research was recently published in Agrosystems, Geosciences and Environment Journal, a publication of the American Society of Agronomy and Crop Science Society of America.

Prasad’s team recently tested if one “universal” soil test could perform better than these region-specific ones. One effective test would make it much easier to compare results between different areas. “It is easier to compare ‘apples to apples’ than ‘apples to oranges,’” says Prasad.

Those three tests are known as Mehlich 1, Mehlich 3 and Lancaster, named for the scientists who developed them. In Alabama, where Auburn is, scientists use Mehlich 1 for some soil types and Lancaster for others. Mehlich 3 was designed to work in most soil types, but had not been tested in Alabama to see if it was an effective testing method.

So, the lab collected soil samples from Alabama’s five different soil regions. Then they tested the soil samples using all three tests with regard to phosphorus levels in the samples.

They found that the Mehlich 3 test extracted about 1.5 times as much phosphorus as the Mehlich 1 test, and about the same as Lancaster. The results indicated Mehlich 3 could perform at least as well as the other tests.

The scientists also looked at how the tests measured water-soluble phosphorus. This form of phosphorus is readily available to plants. But it also is easily washed away or leached down by rainwater. They discovered that Mehlich 3 was better than the other two tests at accurately measuring this form of phosphorus.

Understanding water-soluble phosphorus is especially important in Alabama. That’s because the state’s large poultry industry produces a lot of manure. That manure, known as litter, is spread on farm fields as fertilizer. While it’s a good way to recycle nutrients, this spreading has tradeoffs. “Long-term application of poultry litter in excess of crop requirement leads to buildup of phosphorus in the soil,” says Prasad. “We needed to find a soil test extractant that can provide a better representation of the phosphorus loss risk from farmlands.”

While the Mehlich 3 test seemed like the clear winner, it will take more research to fully implement it across Alabama. “For agronomic fertilizer recommendations within a state or soil region, extensive field calibration and verification studies are required,” says Prasad. “The calibration study is expensive as well as time consuming.”

Creating standardized testing across the state could have big payoffs by helping farmers efficiently grow more food while protecting their local environment. Prasad’s research shows that the Mehlich 3 test can work effectively for all Alabama farmers in measuring phosphorus levels.