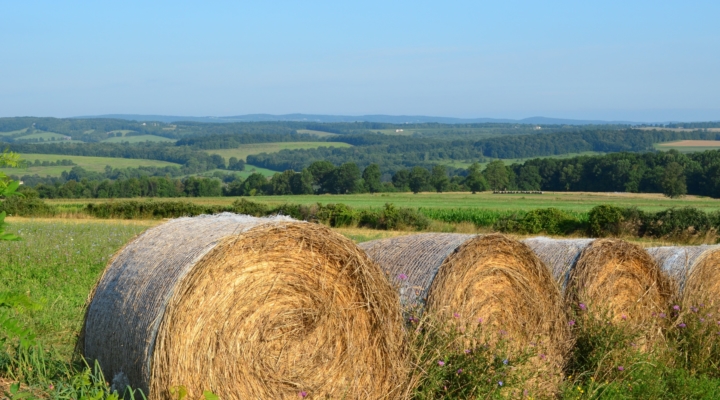 “New York City residents are fortunate to have the Queens County Farm in the middle of a city of nearly 10 million people,” Commissioner Ball said. “The farm is a treasure and a testament to New York State’s appreciation of its agricultural heritage." (Photo: NYS Department of Agriculture and Markets)

QUEENS, N.Y. — New York State Department of Agriculture and Markets Commissioner Richard A. Ball today announced the restoration of land to one of New York State’s longest continuously working farms. The expansion of the Queens County Farm will increase the area used for crop production by more than 30 percent, allowing the farm to grow more food and continue its work to bring more fresh produce to hungry New Yorkers.

“New York City residents are fortunate to have the Queens County Farm in the middle of a city of nearly 10 million people,” Commissioner Ball said. “The farm is a treasure and a testament to New York State’s appreciation of its agricultural heritage. A lot of our work at the Department is about connecting the dots between our farm communities and our urban centers.  This farm is proof that urban farming plays a major role in driving New York’s economy and enhancing quality of life for its residents.”

Commissioner Ball joined Queens County Farm Museum leaders and members of the community to celebrate the expansion of the farm.  The event highlighted the rise in popularity of urban agriculture in New York.

Queens County Farm Museum Executive Director Jennifer Walden Weprin said, “This is big news for Queens Farm. This land leased to us by the State was part of the farm’s original footprint in 1697. This expansion supports the farm’s planned growth and will help enable us to broaden our reach so we can serve more people in need of fresh produce in our communities.”

The announcement comes on the heels of an agreement between the non-profit organization and the New York State Office of Mental Health, which owns the property and has agreed to lease it for crop production. The addition of the plot of land will enable the farm to expand on the 200 varieties of crops it currently produces, including garlic, potatoes, winter squash, sweet potatoes and corn.  Nearly 14,000 pounds of fresh fruit, vegetables, herbs and flowers are cultivated and grown each year on the site, which is also home to 270 farm animals.

Dr. Ann Sullivan, Commissioner of the New York State Office of Mental Health said: “The Office of Mental Health is delighted to provide Queens County Farm Museum with the space it needs to expand crop production and bring more produce to kitchen tables in Queens. Food scarcity is a critical social determinant of mental health and we are happy to support any effort that combats its effects.”

The Queens Farm serves the New York City community.  It donated nearly 400 pounds of fresh food in the past year and formed a partnership with Jamaica Hospital to bring fresh produce to its service area, an area that has traditionally experienced limited fresh food access.

The Queens County Farm Museum is the largest area of farmland in New York City and one of the longest continually operating farms in New York State. Established in 1697, the farm is a New York City landmark and it is on the National Registry of Historic Places. A member of the Historic House Trust of New York City, the Queens County Farm Museum is the most visited historic house in New York City, according to Historic House Trust visitor data. The Farm Museum is located on 47 acres of land that has been preserved for its original purpose of agriculture and connects visitors to agriculture and the environment through educational and public events. Events focus on biodiversity, nutrition, health, wellness, climate change and preservation of local history.

The farm hosts an average of 400,000 visitors annually – including more than 100,000 students per year – and has welcomed more than 10 million visitors since the non-profit was established in 1975.

The original site was farmed by the Adriance family, who worked the land for over 100 years, through five generations. Four subsequent owners continued the tradition of farming the site until a real estate investor, Pauline Reisman, purchased the land in 1926 before turning it over to New York State for Creedmoor Hospital six months later. The hospital continued to farm the land for produce and ornamental plants and to provide additional activities to patients. When the hospital announced plans to sell the property, local community members organized to save the farm and created the Queens County Farm Museum in 1975.

Overtime calculator and other tools available