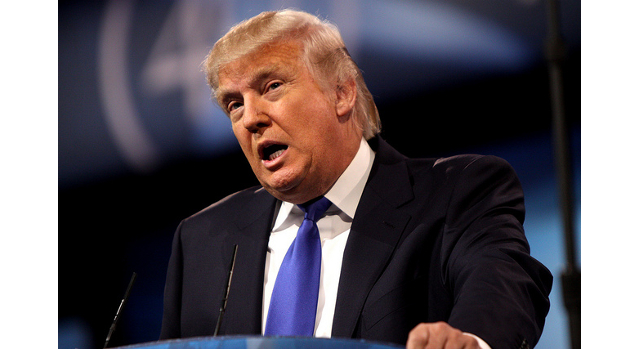 The administration's plan on the bailout announced last week would borrow money from the Treasury to pay producers of soybeans, sorghum, corn, wheat, cotton, dairy and hogs. Many farmers have criticized Trump's tariffs and the damage done to commodity prices and markets. (Gage Skidmore, Flickr/Creative Commons)

WASHINGTON (AP) — President Donald Trump’s trade policies are turning long-established Republican orthodoxy on its head, marked by tariff fights and now $12 billion in farm aid that represents the type of government intervention GOP voters railed against a decade ago.

President George W. Bush increased the number of countries partnering with the United States on free trade agreements from three to 16. President Ronald Reagan signed a landmark trade deal with Canada that was later transformed into the North American Free Trade Agreement (NAFTA) and expanded to include Mexico. Both those Republican presidents also enacted tariffs, but their comments on trade were overwhelmingly positive.

“We should beware of the demagogues who are ready to declare a trade war against our friends, weakening our economy, our national security and the entire free world, all while cynically waiving the American flag,” Reagan said in a 1988 radio address.

Trump, by comparison, has called NAFTA “the worst trade deal maybe ever signed anywhere,” and his administration has opted to use tariffs as a tool intended to leverage more favorable agreements with virtually every major U.S. trading partner. He shredded the trade agreement the Obama administration tried to work out with Pacific Rim nations that had strong backing from farm groups and chief executives from major U.S. corporations.

Republicans also have altered the priority of tackling the national debt, an issue the GOP hammered President Barack Obama on as the country struggled to recover from the 2008 economic crisis. “Our nation is approaching a tipping point,” GOP Rep. Paul Ryan of Wisconsin, now the House speaker, said in January 2011 when the national debt hit $14 trillion.

Today, the Congressional Budget Office projects the $21 trillion debt will rise to more than $33 trillion in 10 years. That estimate notes that the tax cut lawmakers passed in December would increase economic output but add $1.8 trillion to the deficit over the coming decade.

The GOP’s evolving priorities are not lost on some in the party. Rep. Mark Sanford, R-S.C., who lost a close primary election this year after butting heads with Trump on some issues, said he finds it “perplexingly destructive” for the GOP brand.

“It takes a long while to build a brand, but brands can be diminished or destroyed in relatively short order, and I think the administration is destroying bedrock cornerstones to what the party has historically stood for,” Sanford said. “There is no conversation on the debt, deficit and government spending these days. That has been a cornerstone.”

Sanford made headlines as South Carolina governor when he said he would reject stimulus money approved during the financial crisis because he did not think the country should go into debt to fund recovery efforts.

“Here we are now with a hypothetical $12 billion bailout package and you don’t hear a word,” Sanford said. “That is quite a transition in not so many years from decrying what the Obama administration had done with bailouts to now endorsing the idea of bailouts.”

Trump, in a Friday interview on Fox News’ Sean Hannity’s radio show, said the strong economy would help the U.S. reduce the deficit. “The economy, we can go a lot higher. … We have $21 trillion in debt. When this really kicks in we’ll start paying off that debt like water. We’ll start paying that debt down.”

The administration’s plan on the bailout announced last week would borrow money from the Treasury to pay producers of soybeans, sorghum, corn, wheat, cotton, dairy and hogs. Many farmers have criticized Trump’s tariffs and the damage done to commodity prices and markets.

But it’s unlikely that the Republican-controlled Congress will try to block the administration’s agricultural aid plan.

“I’m looking at this and saying, ‘You’re going to single out one sector?’ What about the manufacturing sector? What about the energy sector?” said Sen. Lisa Murkowski, R-Alaska. “Where do you draw the line? I’ve got some real concerns.”

But others praised the move. GOP Rep. Mike Conaway of Texas, chairman of the House Agriculture Committee, called it “welcome relief.”

“This is the right fight to have, but in the meantime, our producers have got to live as this fight is going on,” Conaway said of a trade dispute with China that has prompted the imposition of tariffs by both nations.

Conaway said the president has reshaped the way Republicans think about trade.

“He’s kind of changed the narrative of the conversation that it’s really not OK to let other people take advantage of America,” Conaway said.

Rep. Dan Kildee, D-Mich., said it’s clear the GOP has changed over the past two years with Trump in office.

“This is the party of Trump. He calls the plays and they line up and they execute the play,” Kildee said.

But Kildee also opposed the Trans-Pacific Partnership deal that the Obama administration was trying to work out with Japan, Vietnam, Singapore and others. He and many other Democrats described past trade deals such as NAFTA as hurting workers in their home districts. So why the criticism of Trump and the efforts he has undertaken on trade?

Kildee said he would prefer a more deliberative approach and a multilateral approach that doesn’t fray longstanding alliances.

The president’s meetings with lawmakers in the past week and his trade advisers’ visits to Capitol Hill are acknowledgements that many GOP lawmakers are worried about where Trump is headed — and what it could mean in the November election as farmers, bourbon makers and manufacturers who use imported steel and aluminum deal with the fallout.

A possible breakthrough with the European Union announced Wednesday at the White House appears to have eased their concerns and given the president more time to work out new deals.

“The fact the EU was here today and good talks happened, I think that points to there’s proof it’s working,” said Rep. Dan Newhouse, R-Wash. “That’s not just wishful thinking. I think we can see that.”