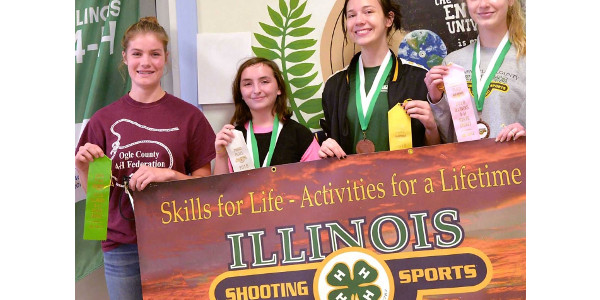 To become involved in the 4-H shooting sports program in your county, contact your county U of I Extension office or visit 4-H.illinois.edu for more information. (Courtesy of University of Illinois Extension)

OREGON, Ill. — Sometimes the real wins have nothing to do with how many bullseyes you hit; it’s what changes inside of you because you tried.

Teens across Illinois competed in the Illinois 4-H State Rifle and Pistol Shoot Sept. 28-29 at Central Illinois Precision Shooters in Bloomington. Inside the glass enclosure, teens focused on the paper targets across the wall. Outside the glass, their parents and 4-H volunteer leaders followed their journey of courage, compassion, dedication, and leadership.

“I saw more emotion out of him than I ever did when he competed in any of the ball sports,” said a Johnson County parent. “From each event, he learns more; and we learn more of what it takes.”

Extension 4-H Program Coordinator Robin Mizell said he saw seasoned competitors come up and offer advice and encouragement to the young member. One of the top competitors told the beginner to “keep trying and you will improve.”

“But that’s what 4-H is all about.” Mizell said. “Whether it’s shooting sports or public speaking or cooking or showing livestock, inspiring others to work hard to achieve their own personal best is a core 4-H value.”
Mizell assists the 4-H shooting sports program for Johnson County. “Since our shooting sports program crosses county lines, club meetings bring members who don’t normally interact with each other together to learn and socialize, he said. “The project teaches responsibility, patience, and precision which will transfer to other aspects of life.”

Jaden Thompson of McLean County continues to dominate the Illinois 4-H rifle sport. The Olympics hopeful has placed first or second in the state for the past three years. The Bloomington teen claimed first place with a 40-point margin.

The smallbore .22 caliber division of the contest tests the participants’ ability to shoot from three positions, lying prone, kneeling or sitting, and standing. In addition, participants shoot from different distances, either 25 or 50 feet. For some rounds, the youth must take all five shots within a 25-second time limit; other rounds allow up to 15 minutes to complete the set of shots.

Top finishers in the contest have the option to advance to national competition in June 2019 in Grand Island, Neb., said Curt Sinclair, University of Illinois Extension interim shooting sports educator. Financial support for the national shooting sports teams is provided by the Illinois 4-H Foundation.

To become involved in the 4-H shooting sports program in your county, contact your county U of I Extension office or visit 4-H.illinois.edu for more information.

A good year for pumpkins