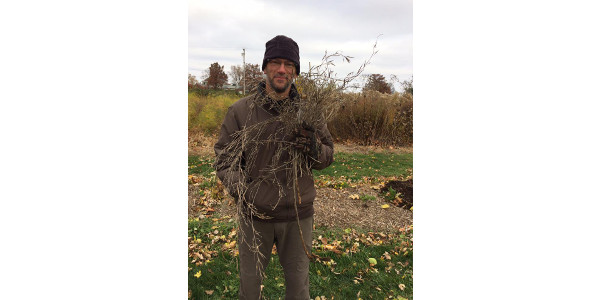 BLOOMINGTON, Ill. — On a blustery, spitting day in November, volunteers were completing winter preparation work at the Refuge Food Forest at One Normal Plaza Park. The day’s plan called for caging and wrapping young trees, but dropping temperatures made the nimble work difficult. Instead, volunteers donned gloves and weeded beds, and in turn, made a surprising discovery.

The food forest was planted on the grounds of the former Illinois Soldiers’ and Sailors’ Children’s School (ISSCS) in May of 2015. The primary crop includes 500 berry canes and 300 nut shrubs. The installation also includes rhubarb, asparagus, and herbs; plus apple, pear, peach, fig, persimmon, and paw paw trees, along with countless other native prairie plants.

These are perennial food producing crops for the public to enjoy year-after-year. Therefore, it came as a surprise when turnip seed heads were discovered in a bed of black currants. The seeds likely lay dormant for decades, according to U of I Extension Local Foods System and Small Farms Educator, Bill Davison. Other “volunteer” plants had previously indicated that there might have been a garden, or perhaps the ISSCS farm, on the site now occupied by the Food Forest, though construction debris has also periodically turned up in the site’s rich, black soil.

Davison will grow out the seeds in test plots and at the Unity Community Center in the 2017 season, and then distribute additional seed to libraries in Normal and Eureka and curious growers. Of particular interest, says Davison, is whether the variety is one that is no longer commercially available.

According to Ruthie Cobb, of the ISSCS Historical Society, in an interview on WGLT Radio, the ISSCS was the first publicly funded child welfare institution in the state of Illinois and operated from the 1860s to 1970s. The Refuge Food Forest site is in fact not, far from where the ISSCS farms and 4-H garden space were located. The children at the home helped harvest and prepare the crops to feed up to 700 residents in the 1930s.

In 2017, the site will be an inviting space for community members to harvest and experience flavors of fresh fruit from a sustainably managed plot for free. Though most of the produce is not yet harvestable until June, this year mushroom logs will be available on the site for early spring harvest.

The Refuge Food Forest was co-funded by the Town of Normal and University of Illinois Extension. To volunteer at the Refuge Food Forest and keep up to date on what is ready for harvest, join the discussion group on Facebook, or contact Reid Young, University of Illinois Extension Program Coordinator, Master Naturalists, and Local Foods and Small Farms at (309) 663-8306 or by email ryoun@illinois.edu.

University of Illinois Extension provides equal opportunities in programs and employment. If you need a reasonable accommodation to participate in this program, please call 309-663-8306.