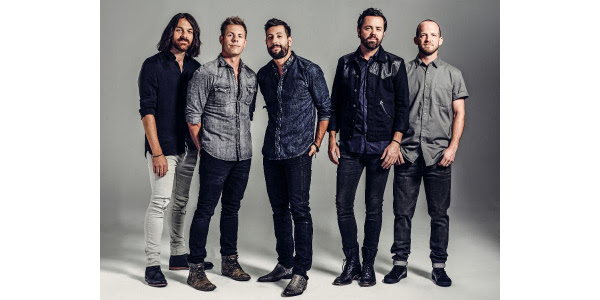 “The opportunity to bring one of country music’s rising stars to the Clay County Fair is so exciting,” said Fair Manager Jeremy Parsons.  “This concert will be one of the highlights that people will want to ‘come home’ for during the Fair.”

Proving that they are not your average country band, Old Dominion blends old-fashioned country charm, lyrical wit and rock n’ roll grit into radio-friendly, hook-heavy pop nuggets. Old Dominion has emerged as one of the hottest breaking bands in country music, fusing clever lyrics and an infectious sound. The band released their first full-length album Meat and Candy, which was recently named RIAA-certified GOLD and called “deceptively smart, occasionally cheeky, stellar debut,” by Entertainment Weekly. Old Dominion released their PLATINUM two-week No.1 “Break Up With Him” and RIAA-certified GOLD hit “Snapback” prior to their third single “Song For Another Time,” which hit No. 1 on Billboard and MediaBase on Dec. 12, 2016.

They spent their summer on Kenny Chesney’s Spread The Love Tour and just wrapped their headlining Meat and Candy Fall Tour in December 2016. Fifteen of the dates were tapped as Stagecoach Spotlight: Old Dominion Meat and Candy Tour; the first-ever tour produced by the award-winning Stagecoach Music Festival. This spring, Old Dominion will join Miranda Lambert on her Highway Vagabond Tour. In 2016, the band was named ACM New Group of the Year, ACCA Breakthrough Group of the Year, AIMP Songwriter-Artist of the Year and Music Row Breakthrough Artist of the Year. Old Dominion consists of lead singer Matthew Ramsey, lead guitarist Brad Tursi, multi-instrumentalist Trevor Rosen, bassist Geoff Sprung and drummer Whit Sellers.

Tickets will go on sale Thursday, January 19th at 10:00am. Prices are $38 (general admission stage front standing), $33 (reserved Grandstand seating), and $28 (general admission bleacher seating). Tickets will be available online at www.midwestix.com, by phone at 515-244-2771, or in person at the Events Center Box Office. There will be no additional fees applied to any of these purchase methods.

About the Clay County Fair
“Come Home” September 9-17, 2017 to Spencer, Iowa for our Centennial Celebration!  “The World’s Greatest County Fair” since 1917, the Clay County Fair attracts more than 300,000 guests each September. “Come Home” for unique experiences including world-class Grandstand entertainment, award-winning fair food, daily livestock and horse shows, more that $150,000 in free entertainment, thousands of competitive exhibits, the thrilling GoldStar Amusements Midway, hundreds of commercial vendors, and the largest farm machinery display at any fair in the United States. Visit claycountyfair.com to plan your visit.