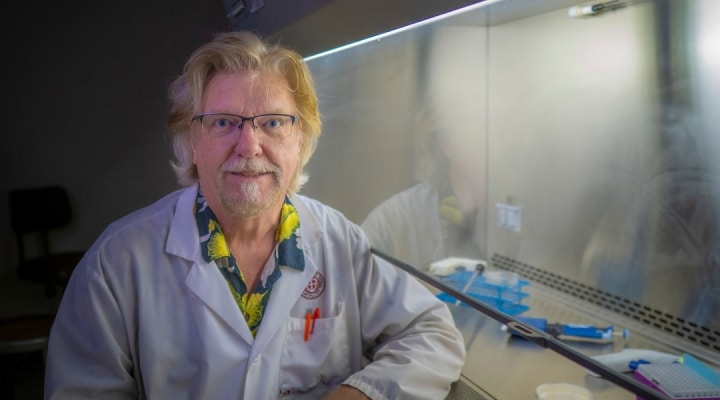 Oklahoma State University’s Leon Spicer has been one of his career field’s most published researchers during his 33 years at the university. (Photo by Todd Johnson, OSU Agricultural Communications Services)

A professor in the OSU Department of Animal and Food Sciences, Spicer is only the second OSU faculty member to receive the national honor, which recognizes research excellence in physiology and endocrinology involving large and small animals during the 10 years preceding the recognition. The first recipient was a mentor of Spicer’s, Robert P. Wettemann, a renowned animal science researcher who served on the OSU faculty for 42 years.

“Leon’s dedication to his work has always been in evidence, right from the beginning when he joined our department,” Wettemann said. “Many was the night when I would be leaving the animal science building at 10 p.m. and Leon would be in his lab or office, still running an experiment or writing up research findings.”

Spicer’s research during the past 10 years has primarily focused on improving reproductive efficiency in dairy cattle, especially approaches to better understand nutritional and metabolic regulation of ovarian function. Recent efforts have used microarray technology to discover several genes involved in the control of ovarian function.

A twist on Spicer’s research – funded by the National Institutes of Health – was how his work done on cows might translate into a potential ovarian cancer treatment for women.

“From an ovarian perspective, there are key similarities in follicular development between a human and a bovine,” Spicer said. “It’s just the biological makeup and a good example of how conducting science in one area or on one species can provide key insights that may lead to benefits in other areas or species.”

The OSU professor spoke on OStateTV about his research and how it might benefit cancer protocols in humans.

“It’s a rare feat to be awarded either distinction. We have faculty members who have been named one or the other, but only Dr. Spicer has been recognized as both,” said Clint Rusk, department head. “The combination is a great benefit to our department, the college and the university, not only in terms of providing services but in student recruitment. Students want to learn from the best, especially if the teacher is also highly engaging.”

Rusk said Spicer is renowned for being one of the most popular animal science authors in the nation. He has published more than 520 research articles and abstracts, 115 of which were published in the past decade.

“Leon is not slowing down, even after more than 30 years at OSU,” Wettemann said. “He and I recently collaborated on and published reproductive physiology research that built on some studies done years ago. Yes, I’m retired, and Leon is nearing retirement, but he keeps rolling on and I was happy to get back on board.”