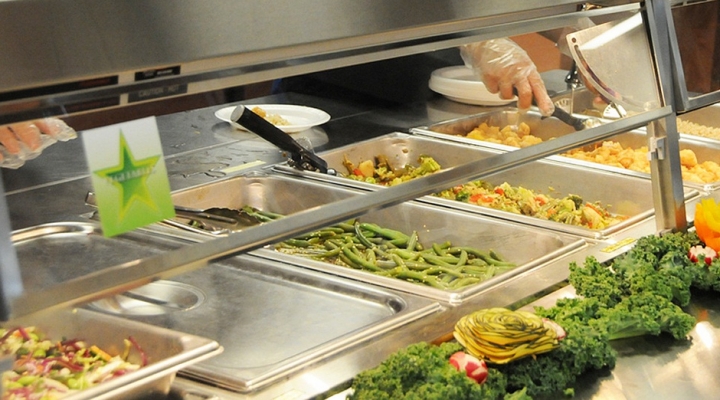 Recently, school "lunch shaming," has come under fire across the country with critics saying the practice leaves students stigmatized, embarrassed, shamed and maybe even hungry. Now, some child advocates fear a new state policy that took effect in Oklahoma on July 1 could exacerbate the problem. (U.S. Department of Agriculture, Flickr/Creative Commons)

OKLAHOMA CITY (AP) — Children who find themselves short on lunch money at some Oklahoma schools see their tray of hot food sent back to the kitchen, where it’s most likely tossed in the trash.

Those same students leave the lunch line with what’s known as an alternate meal, usually a cold cheese sandwich and milk, a visible signal to their classmates that they lack lunch money, The Oklahoman (http://bit.ly/2sNKqd4 ) reported.

Even a low account balance can prompt a handstamp reminder — another obvious mark.

Recently, school “lunch shaming,” has come under fire across the country with critics saying the practice leaves students stigmatized, embarrassed, shamed and maybe even hungry.

Now, some child advocates fear a new state policy that took effect in Oklahoma on July 1 could exacerbate the problem.

Under the new policy, school districts are allowed to carry students’ unpaid meal charges into the next school year. In the past, schools were required to write off those balances at the end of each year and were not allowed to deny a meal to a student in a new school year based on prior charges.

Supporters say the new policy will save some districts thousands of dollars, but critics fear the change could mean more students receive less nutritious alternate meals earlier in the school year.

“Our main concern would be that children would be denied meals or publicly shamed because of their remaining debt, which is harmful to their healthy development and academic achievement,” said Cara Baldari, a senior policy director at First Focus, a national child advocacy organization.

For years, schools have struggled with the issue of unpaid lunch bills, seeking to balance the need to feed hungry students and their financial bottom line.

At the same time, some local, state and federal policy makers have sought to shield students from the stigma associated with those unpaid bills. In April, New Mexico became the first state to outlaw shaming students with meal account debt, directing schools to work with parents and end practices that embarrassed students.

As of July 1, the U.S. Department of Agriculture, which oversees public school lunches, began requiring districts to establish and provide families with a written meal charge policy, which will include how unpaid balances will be handled to avoid lunch shaming.

“That was never the intent,” said Deana Silk, state Education Department spokeswoman. “We hope it will help schools. Every penny is needed inside of the school house.”

Come fall, Edmond Public Schools, along with Millwood, and Moore will be among the area districts taking advantage of the new state policy.

Dan Lindsey, Edmond’s child nutrition director, requested the state policy change saying there was no consequence if parents didn’t pay debts from the previous year. The district has tried to collect on those past-due bills, typically about $2,000 a year, but found little success.

“I hate to put it back on parents, but ultimately (hot lunches get taken) because money isn’t put on the account,” Lindsey said.

He said the new policy largely effects students whose parents should be able to pay for a meal. About 61 percent of the state’s students already qualify for free or reduced price lunches based on family income.

“There are no needy kids that suffer from this,” Lindsey said.

In Millwood, Superintendent Cecilia Robinson-Woods doesn’t want the outstanding balances to follow the students, but feels she has to set a precedent with parents.

Some districts, including Putnam City and Mid-Del, are opting not to change their policy and will continue to set account balances at zero for the start of the school year.

“We work here to feed,” Fox said. “The worst part of a cafeteria worker’s job is collecting lunch money — they would rather just feed the children.”

The district will continue efforts to collect unpaid charges, which this year were less than $1,000, but, eventually, the debts will be forgiven, she said.

In Putnam City, district officials plan to watch how the new policy affects other schools. At the end of the last school year, students had almost $22,000 in unpaid balances, almost 2 percent of the $1.1 million parents pay for district meals, said spokesman Steve Lindley.

In Edmond, which has a $10 charge limit for meals, district officials recently told cafeteria employees to ask students’ permission before stamping their hands, Lindsey said. When financial issues come up in the lunch line, cashiers are told to be discrete, he said.

“It’s kind of like any other business, you are relying on the cashiers that interact with the students directly to handle the situation,” Lindsey said.

At some schools, cashiers determine whether a student gets a hot meal at the beginning of the lunch line, before they have the opportunity to grab a tray and potentially be embarrassed when it’s taken.

“We feel like we’ve done all we can to not have to give the (alternate) meal at that point,” Hart said.

If a student is denied a regular meal and they’ve already touched the tray, it has to be thrown away for sanitary reasons, said Jimmy Martin, managing director of federal programs at Moore Public Schools.

Oklahoma needs to take a more positive stance on child hunger, said Joe Dorman, CEO of the Oklahoma Institute for Child Advocacy, which supports anti-lunch shaming legislation. Even parents who should be able to afford to pay for school meals, might not always be able to do so, he said.

Sometimes, parents might forget to refill an account, but in many cases children run out of money and their parents might not have any to give, he said.

Other child advocacy groups agree, saying it might be easy to assume people don’t want to pay their lunch bills, but that’s often not the case.

In a letter to U.S. senators supporting a federal anti-lunch shaming measure, First Focus pointed out not all students who qualify for the free and reduced-price program are enrolled and that even those who receive reduced-price lunches still might not be able to afford the difference. Language barriers, paperwork issues and other problems can also prevent qualifying students from participating in the program.

Some Oklahomans are dissolving student meal debt one donation at a time.

After reading stories about childhood hunger in public schools, Matt Yeager in early May started a GoFundMe page. His goal? To raise enough money to pay off the student meal account debt of the Oklahoma City Public Schools, then about $8,500.

By the end of May, Yeager, 36, of Edmond, had raised $400, which he donated to Linwood Elementary. News stories about his donation helped raise another $1,500, which Yeager plans to donate to districts where the money is needed most.

“My only regret with the campaign is that I didn’t start it sooner,” Yeager said.

Other area school districts have also experienced similar generosity. In Mustang, the American Legion recently donated $1,000 to the district, and in Mid-Del, principals and school employees have written checks to soften the food burden for some district families.

In the Oklahoma City Public Schools, 84 percent of students qualify for the free or reduced-price meal program. Starting this fall, a new USDA grant that provides free school breakfasts and lunches to every student in high-poverty communities should help the district end the stigma of lunch shaming.

“I want to try to help kids get better nutrients and be better fed,” Yeager said. “For a lot of kids, school is the best opportunity for that.”