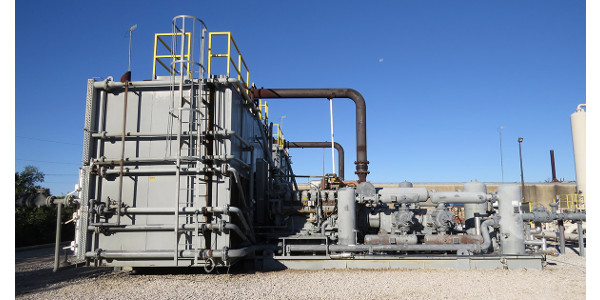 Published online June 21 in the journal Science, the study is led by Environmental Defense Fund researchers, with support from 15 institutions and 19 co-authors, including Anthony Marchese, CSU professor of mechanical engineering. The study integrates over half a decade of research by a large community of scientists, among them Marchese; and Dan Zimmerle, senior research associate at the CSU Energy Institute.

In 2014, Marchese and Zimmerle led EDF-sponsored work into defining methane emissions from two key segments of the natural gas supply chain: gathering and processing, near the front end; and transmission and storage, further downstream. Their results helped shape the new estimates of total emissions just published. Over the last three years, their work has also been incorporated in and cited by the EPA Greenhouse Gas Inventory.

The new EDF study estimates the current methane leak rate from the U.S. oil and gas system is 2 percent, versus the current EPA inventory estimate of 1.4 percent. While the percentages seem small, the volume represents enough natural gas to fuel 10 million homes – lost gas worth an estimated $2 billion.

“It has been an honor and privilege to be part of this community of researchers to better quantify the extent of the problem of methane emissions,” Marchese said. “When we started this work, there was a debate as to whether total methane loss from all natural gas operations was 1 percent, or as high as 8 percent. Those of us who were familiar with the engineering equipment and practices in place had a hard time believing that the leak rate was 8 percent ­– but we really didn’t know. Now, based on what we’ve concluded from five years of effort, our focus can go to the actionable practices and technologies that can reduce emissions rates.”

More than 140 researchers from 40 institutions were co-authors on the underlying papers. Fifty oil and gas companies provided site access and technical advice to these studies. The findings reported feature measurements at over 400 well pads in six basins. They include scores of midstream facilities, data from component measurements, and aerial surveys covering large swaths of the U.S. oil and gas infrastructure.

“These studies, synthesized in this Science paper, have transformed our understanding of methane emissions from natural gas systems in the United States,” said Professor David Allen, of the Cockrell School of Engineering at the University of Texas at Austin, who is a contributor to the new paper and lead author on several of the earlier studies.

Methane is a highly potent greenhouse gas, with over 80 times the warming impact of carbon dioxide over the first 20 years after it is released. It is also the main ingredient in natural gas, and a saleable product when recovered. The higher overall methane leak rate relative to EPA’s current estimate underscores a growing strategic business and environmental challenge for natural gas in an increasingly competitive, lower-carbon economy.

“This is by far the most comprehensive body of research of its kind,” said EDF Chief Scientist Steven Hamburg. “Scientists have uncovered a huge problem, but also an enormous opportunity. Reducing methane emissions from the oil and gas sector is the fastest, most cost-effective way we have to slow the rate of warming today, even as the larger transition to lower-carbon energy continues.”

The International Energy Agency estimates industry can reduce their worldwide emissions by 75 percent – and that up to two thirds of those reductions can be realized at zero net cost.

“Although we confirmed that methane emissions are substantially higher than previously thought, the good news is that our new understanding provides a cost-effective path forward to eliminate the wastage of this valuable resource,” said Allen Robinson, professor and department head of mechanical engineering at Carnegie Mellon University.

Leading companies are beginning to recognize the challenge, but action to reduce emissions is only just getting started. In April, BP set its first quantitative methane target. Last month ExxonMobil committed to cut methane emissions and flared gas volumes, following an earlier announcement from its subsidiary XTO Energy that unveiled their methane reduction program. Shell, Qatar Petroleum and a host of other producers have committed to continuously reduce methane emissions across the natural gas supply chain.

Overall, EDF is calling for a 45 percent reduction in global oil and gas methane emissions by 2025 – a goal that would have the same short-term climate benefit as closing one-third of the world’s coal plants when achieved.

EDF recently announced plans to build MethaneSAT, a purpose-built satellite designed to measure and map human-caused methane emissions almost anywhere on earth. Due to launch in 2021, MethaneSAT will help both countries and companies track problem areas, find solutions, and monitor their progress.

EDF, the Oil and Gas Climate Initiative companies, and the UN Environment’s Climate and Clean Air Coalition are also collaborating on a set of peer-reviewed methane studies in locations across the globe, which will complement the data collected by MethaneSAT. These studies are built on the methods pioneered in the U.S.-based studies upon which the synthesis paper is based.

Read more about this work at https://www.edf.org/climate/methane-studies.