Home / Ohio / Ohio’s top Conservation Farmers honored
A new user experience is coming! We'll be asking you to login to your Morning Ag Clips account March 1st to access these new features.
We can't wait to share them with you! Read more here. 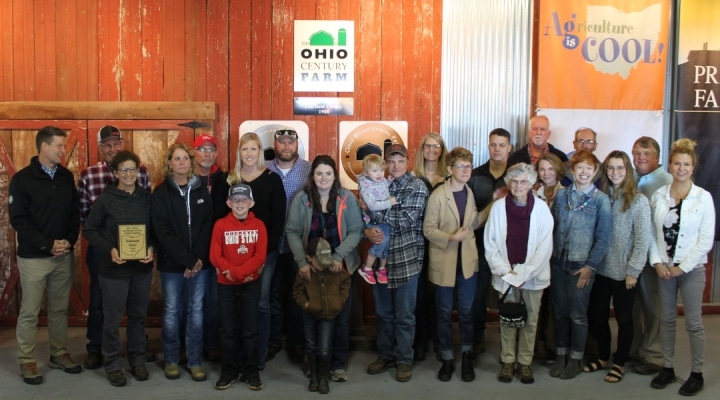 REYNOLDSBURG, Ohio — The Ohio Department of Agriculture recognized five families as winners of the 2021 Conservation Farm Family Awards at the Farm Science Review in London.

Since 1984, the Conservation Farm Family Awards program has recognized Ohio farm families for their exemplary efforts conserving soil, water, woodland, wildlife and other natural resources on the land they farm. Conservation farm families also host a variety of educational programs, opening their farms to schools, scout groups, farm organizations and others.

The families each receive $400 from the Ohio Farm Bureau Federation, are featured in the September issue of Ohio Farmer magazine. Ohio Farmer magazine has sponsored the Ohio Conservation Farm Family Awards since the program’s inception. Nominations are sought annually between January and May, and Ohio farming families are encouraged to apply. For more information or to apply, individuals can contact their local Soil and Water Conservation District (SWCD).

Chris and Gail Rodabaugh farm with two sons, Clint and Cody, who own Rodabaugh Meats, a retail and custom slaughter business. Chris and Gail also have another son, Chet, who lives in West Virginia. The Rodabaughs farm 1,200 acres of no-till corn and soybeans in Hardin and Hancock counties. They have been no-tilling for more than 30 years and have had cover crops on all the acres. About 130 acres are enrolled in various conservation programs such as waterways, wetlands, tree plantings and quail buffers. They raised hogs for many years, but now have a small meat goat herd in partnership. The Rodabaughs were the 2020 Hardin Conservation Cooperator of the Year. The family has hosted conservation field days and worked with Hardin SWCD on many projects.

Sam and Lauren Sluss are both fourth-generation farmers in Stark County, Ohio. They have two children. Besides farming, Sam and Lauren have off farm jobs. The Sluss family farms 275 acres in Stark and Carroll counties, raising no-till corn, wheat, hay and soybeans. They also plant about 200 acres to cover crops each fall. The Slusses worked with Stark Soil and Water Conservation District to be a stop on the cover crop field day for farmers to promote the benefits of cover crops for improving soil health. The Sluss family was chosen as the 2020 Cooperator of the Year by the Stark SWCD.

Cliff and Jean Miller worked as a team in marriage for 57 years and in farming for 40 years. They have two daughters. Miller Ridge Farm is composed of 167 acres. They utilized managed-intensive grazing by dividing their pasture into 32 paddocks. They utilized EQIP and CSP grants to improve water quality, preserve top soil and manage the woodland areas of the farm. Cliff served as a member of the Carroll County Soil and Water Conservation board for 12 years, and he served as chairman of the board for four years. He was one of the founding members of The Eastern Ohio Grazing Council, which was formed to improve and advance conservation practices. Miller Ridge Farm also hosted pasture walks and a program for woodland management for the Carroll County Soil and Water Conservation District.

Tom and Jayne Harrod farm alongside their son, Korey, and his wife, Brittany. Their son-in-law, Sean Gerber, helps part time. The Harrods purchase weaned pigs from a neighboring farrowing unit and finish out around 20,000 pigs a year. They have two contract-turkey starter barns. They farm 1,200 acres in Darke County, raising soybeans and no-till corn, all of which is used as hog feed. They are currently planting 300 acres of cover crops. The family was awarded the 2018 Darke County Chamber Achievement Award. Tom was the 2003 Darke County SWCD Cooperator of the Year, and Tom’s dad, Harold, earned that same award in 1973. Tom has been a member of the Darke SWCD Board for 15 years.

Jim and Sheryl Linne own White Clover Farms in Hillsboro, Ohio. They have two daughters. White Clover Farm is 300 acres of pasture, woodland and hay. They converted conventional farmland into a 100% grass-fed beef operation. The operation uses holistic management to ensure improvement to the soils, and uses prescribed grazing to maximize the pasture’s potential. Jim partners with the Highland SWCD for grazing schools and farm tours, in which his land is used as an example of good conservation. Jim was named Highland County SWCD Cooperator of the Year in 2016.

Wet but worth it: Farm Science Review 2021