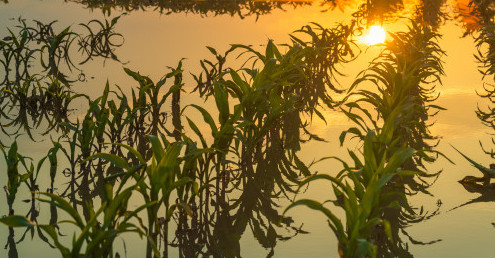 COLUMBUS, Ohio — Though the disaster declaration for nearly half of Ohio’s counties extends low-interest loans to farmers, many growers are hoping for changes that could offer more financial help, according to experts with The Ohio State University.

The full extent of benefits that come with the U.S. Department of Agriculture Secretary Sonny Perdue’s disaster declaration are still unknown. The federal agency has yet to make decisions about the federal disaster aid bill passed in June.

Growers want the USDA to approve requested changes to disaster aid packages that would increase payment guarantees to farmers who file crop insurance claims on acres where they could not plant a cash crop, said Ben Brown, assistant professor of agricultural risk management in the College of Food, Agricultural, and Environmental Sciences (CFAES).

Those changes, if approved, would mean higher payments for farmers hindered in planting this year’s crop as a result of persistent spring rain.

Another proposed change to disaster aid would allow farmers who did not have crop insurance at planting time last spring to still potentially get payments on those acres where they could not sow a cash crop.

“It’s important to note that the USDA can—but is not required—to make those proposed changes,” Brown said. “Could it happen? Yes. Will it happen? We don’t know.”

On July 25, Perdue announced that 40 counties in Ohio can seek disaster relief. In the coming weeks, the USDA is expected to make decisions on the full scope of assistance available to farmers in those counties affected by the unusually challenging growing season.

For now, farmers can apply for emergency low-interest loans, but more of them likely will get by instead by using their next payment from the Market Facilitation Program (MFP), Brown said. That assistance helps offset any losses growers experienced as a result of international tariffs on the crops and livestock they produce. The next trade aid payments will be issued in August and will range from $15 to $30 an acre, Brown said.

“MFP payments will be significant for farmers in 2019, as they were last year too,” he said.

Growers in western and northwestern Ohio were the hardest hit by unprecedented rain levels in the spring when growers typically plant. In Fulton County on the far northwestern border of the state, nearly half the acres that normally grow corn or soybeans won’t hold a cash crop this season, said Eric Richer, an Ohio State University Extension educator in Fulton County. OSU Extension is the outreach arm of CFAES.

“I think it’s important that government officials acknowledge the level of hardship that the 2019 growing season has placed on Ohio farmers, particularly those in northwest Ohio,” Richer said.