Home / Ohio / Ohio State Fair Sale of Champions results
A new user experience is coming! We'll be asking you to login to your Morning Ag Clips account March 1st to access these new features.
We can't wait to share them with you! Read more here. 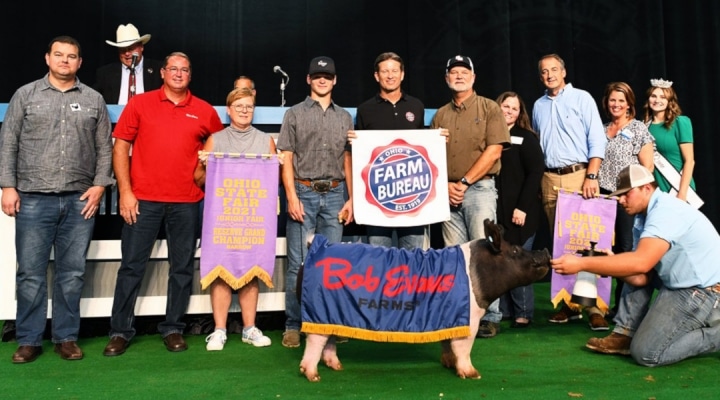 Ohio Farm Bureau collaborated with partners Bob Evans Farms and The Kroger Company to purchase the Reserve Grand Champion Market Barrow exhibited by Cade Peterson for $52,000, of which Peterson received $7,000, with the remaining going to the Youth Reserve Program. Cade is the son of Fred and Angela Peterson of Oak Harbor in Ottawa County. (Ohio’s Country Journal)

“These compassionate buyers support the individual exhibitors, as well as thousands of youth participating in each year’s Fair,” explained Ohio State Fair General Manager Virgil Strickler. “When they participate in the Sale of Champions, they also help fund the Youth Reserve Program, making a huge impact on all young exhibitors.”

Established in 1995, the Youth Reserve Program was developed to reward junior exhibitors who participate in the Ohio State Fair. Funds for the program come from the dollars received over a cap that is placed on the amount an exhibitor can receive from the Sale of Champions. The funds from the program are distributed among carcass contests, scholarships, outstanding market exhibitor program, outstanding breeding exhibitor program, showmanship, skillathons, 4-H, and FFA.

The 2021 Sale of Champions results are as follows:

The Ohio Expo Center is a year-round, multi-purpose convention and meeting facility. The 2022 Ohio State Fair will be held July 27 – August 7, 2022.