Home / Ohio / Ohio Poultry Association award recipients
A new user experience is coming! We'll be asking you to login to your Morning Ag Clips account March 1st to access these new features.
We can't wait to share them with you! Read more here. 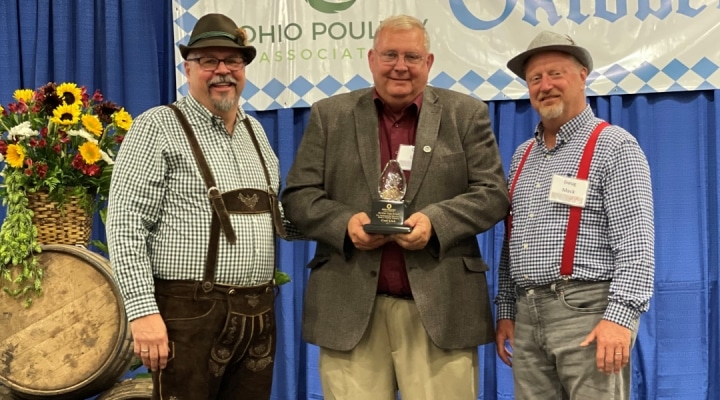 The Ohio Poultry Association’s Golden Egg Award recognizes an individual who has demonstrated their commitment to advancing the mission and values of the poultry community. This year’s recipient was Carl Link of Fort Recovery, Ohio. (Courtesy Photo)

COLUMBUS, Ohio — The Ohio Poultry Association (OPA) announced its 2021 award recipients during the organization’s annual banquet and industry celebration held September 10 in Columbus. This year there were two awards that honored individuals who have made significant contributions to Ohio’s egg, chicken and turkey farming communities.

“This year is particularly special for our organization because we get the opportunity to publicly recognize the hard work and achievements of the outstanding people who make up the Ohio egg and poultry community,” said Jim Chakeres, OPA executive vice president. “I’m honored to work with such talented individuals who have worked tirelessly to advance agriculture in Ohio.”

Awards and recipients at the annual OPA Banquet and Industry Celebration included:

The Golden Egg Award recognizes an individual who has demonstrated their commitment to advancing the mission and values of the poultry community. This year’s recipient was Carl Link of Fort Recovery, Ohio. Link got his start in the poultry industry at a young age. When he was in high school, he began working at St. Clair Mills, which later became Cooper Farms – where he worked for more than 50 years. During his tenure at Cooper Farms, Link held many titles and retired as the general production manager of the company’s south division in Fort Recovery, where he has since returned to work one day a week on special projects. In addition to his leadership at Cooper Farms, Link has served on numerous boards and advisory committees at the state and national levels, including: the Ohio Turkey Marketing Committee, Ohio Department of Agriculture Permitting Advisory Board, the Ohio Pork Council and the National Pork Board. 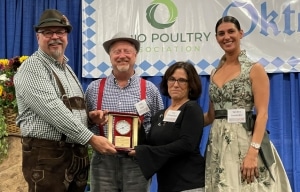 The Meritorious Service Award is given annually to someone in academia or allied industry who has provided significant contributions to the Ohio egg and poultry communities. This year, OPA was pleased to honor Lisa Timmerman, of Fort Recovery, Ohio, with this award. For many years, Timmerman served as an integral member of the Cooper Farms team as the egg division manager and animal care coordinator. In these roles, she oversaw all aspects of hen care and flock management. In 2017, Timmerman joined the Hendrix Genetics team as a key account manager leveraging her production experience to add technical service support and strength in the areas of Ohio, Indiana and Michigan. She has gained the trust and confidence of Hendrix’s laying hen customers and helped to increase the efficiency and productivity of their flocks. A committed and active member of the Ohio egg and poultry farming community, Timmerman is a past president of the Ohio Poultry Association. In addition, she has served nationally on boards for the United Egg Producers and American Egg Board.

For more information, visit the OPA website at www.ohiopoultry.org.