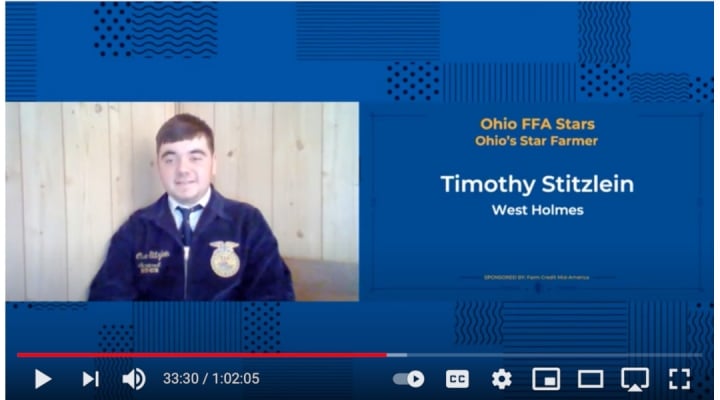 COLUMBUS, Ohio — The Ohio FFA Association named its Ohio FFA Stars on Thursday, April 29 during the Second Session of the 93rd Ohio FFA Convention, held virtually this year on April 29-30, 2021.

This year’s stars were:

Jacob Zajkowski, son of Chad and Amy Zajkowski, is a senior in the Anthony Wayne-Penta FFA Chapter. His Supervised Agricultural Experience consists of agriscience research projects on studies of hydroponics and sustainable greenhouse production. His research explores everything from consumer preference of hydroponic crops to the biofortification of Vitamin B12 in lettuce. After graduation, Jacob plans to attend Cornell University majoring in horticulture. His advisors are Courtney Bockbrader and Whitney Short. This award is sponsored by Farm Credit Mid-America.

Riley Sweigart, son of Jeff and Kim Sweigart, is a graduate of St. Marys. Riley owns and operates Sweigart Custom Baling, where he has baled and sold more than 18,000 bales of straw. He employs high school students to assist with the labor and has purchased several pieces of equipment. He plans to continue working full time and take over the family farm in the next several years. Riley’s advisor is Lucy Bambauer. This award is sponsored by Farm Credit Mid-America.

Robbie Gray, son of Sabrina Eshelman and Ronald Gray, is a senior at Western Brown. Robbie started his SAE by mowing his grandmother’s lawn. A year later, he became employed at Eyre Lawn Care as a lawn technician. In his third year, he is now a crew leader, managing a team of 3 employees and completing tasks that include mowing, weed eating, spraying, aerating, seeding, installing sod, drainage tile and performing equipment maintenance. He plans to attend Rutgers University to complete the Professional Golf Turf Management Certificate program and return to grow the business at Eyre Lawn Care. Robbie’s advisor is Ryan Rosselot. This award is sponsored by Farm Credit Mid-America.

Timothy, son of Tim and Christie Stitzlein, is a graduate of West Holmes. He raises Holstein and Red Holstein dairy cows and heifers. He currently makes all health and management decisions for his 8 cows and 3 heifers. Timothy sells his milk at United Dairy in Martins Ferry and sells his bull calves at the Mount Hope Auction. He also works on his family’s 600 head dairy operation and an additional 600 head dairy operation as a milker, feeder and equipment operator. His plan is to continue to grow the family dairy farm, with the eventual plan to add a new facility with robots and take over the business. Timothy’s advisor is Jaime Chenevey. This award is sponsored by Buckeye Advanced Ag.

Gene editing is a new tool to combat virulent nematodes