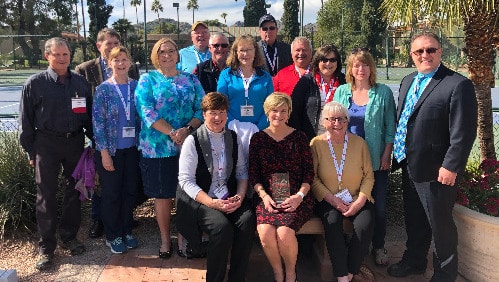 The Ohio Sheep Improvement Association continues to be a leader in many areas of the United States sheep industry. Pictured are some of the Ohio representatives at the recent American Sheep Industry Convention in Scottsdale, Ariz. (Courtesy Photo)

COLUMBUS, Ohio — Well, the 2020 American Sheep Industry Convention in Scottsdale, Ariz., is unfortunately behind us. Those who attended were greeted with beautiful warm, sunny weather with sunny skies and dry, warm temperatures during the day. Certainly, Scottsdale is somewhere we could have stayed for the remainder of Ohio’s cold, wet, miserable weather.

Upon our return to Ohio, I have to say that we should be beyond proud of the Ohio Sheep Improvement Association’s engagement in the American Sheep Industry Association. The annual ASI Convention attracts over 450 sheep producers. Primary discussions include educational opportunities, council and committee meetings, and policy discussions and recommendations.  Each member state has a representative that votes for the issues and policies that ASI will work on during the upcoming year.

Below are other highlights of the meeting, including OSIA members and their contributions to the ASI Meeting, the Shepherd’s Voice Award going to Susan Crowell and results from the National Make It with Wool Contest.

The Ohio Sheep Improvement Association continues to be a leader in many areas of the United States sheep industry, especially in the East.  There is NO other state east of the Mississippi River that rivals our involvement in ASI.  In fact, when I reviewed the ASI state membership numbers, as of May 31, 2019, Ohio actually has the second most state members in ASI, with only the Texas Sheep and Goat Ranchers Association ahead of the Ohio Sheep Improvement Association. This is an organization you can be proud to be a member.