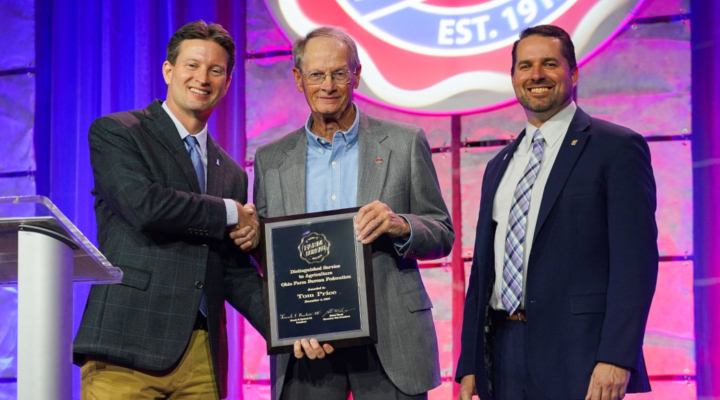 Tom Price of Delaware County was presented with the Distinguished Service Award at the Ohio Farm Bureau Annual Meeting in Columbus on Dec. 4. He was one of three individuals honored for their lifetime contributions to agriculture. Pictured, from the left, are OFBF Executive Vice President Adam Sharp, Price and OFBF President Frank Burkett. (Courtesy Photo)

COLUMBUS, Ohio — Three individuals were recognized for their lifetime achievements in agriculture during the 101st annual meeting of the Ohio Farm Bureau Federation. Long-time Nationwide leader Steve Rasmussen received the Ezra C. Anstaett Heritage Award while farmer Tom Price of Delaware County was honored with the Distinguished Service Award. OFBF Senior Director of Corporate Communications Joe Cornely received the Agricultural Communicator Award, the second time he has been honored with the award.

Rasmussen has been a long-time supporter of Ohio Farm Bureau and the agricultural community. He recently retired as CEO of Nationwide after being elected to the position in 2009. He also served on Nationwide’s board of trustees. Previously, he was president and chief operating officer of Nationwide’s property and casualty insurance operations, Allied Insurance and CalFarm Insurance, an affiliated company with Nationwide.

Currently, Rasmussen serves on the boards of Nationwide Children’s Hospital, American Electric Power and Catalyst. He also is a member of the Columbus Partnership, an organization focused on economic development and downtown Columbus revitalization. Previously, he was a board member of OhioHealth, the National Urban League, the Insurance Information Institute, the Insurance Institute for Highway Safety and the Columbus Metropolitan Library. He and his wife, Cindy, served as co-chairs of the 2012 United Way of Central Ohio campaign.

Price, a Delaware County Farm Bureau member, is a sixth generation farmer who has a hog, cattle and compost business. He volunteers in many capacities statewide, including as a member of the Ohio Expositions Commission and the Ohio Soil and Water Conservation Commission.

Cornely first received the Agricultural Communicator Award for his work as a long-time farm broadcaster at WRFD where he produced the “As We See It” weekly radio program. In 1996 he was voted National Farm Broadcaster of the Year. He was very active in the National Association of Farm Broadcasting and was president in 1995. In 1998, Cornely joined Ohio Farm Bureau as director of media relations and is retiring at the end of the year as senior director of corporate communications.

Apply now for a 2020 Angus Internship

Davidson elected to OFBF board of trustees
September 30, 2021