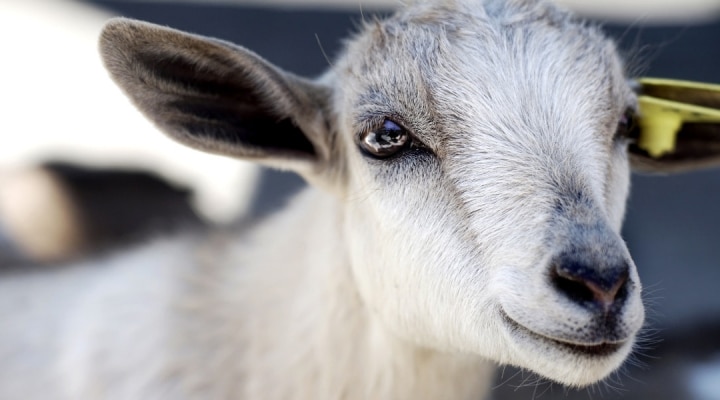 State and local animal control officials visited the property numerous times and met with Burton to try to resolve the animal care concerns, the department said. Removal of animals is a last resort, officials said. (Stock photo by Hannah Markley on Unsplash)

HARTFORD, Conn. (AP) — Connecticut authorities have seized dozens of goats from the home of a longtime environmental activist, in response to citizen complaints and surveillance that revealed animal welfare concerns, according to the state Department of Agriculture.

State and local officials said they executed a search and seizure warrant Wednesday at the home of Nancy Burton, the founder of the Connecticut Coalition Against Millstone, a watchdog group that has been critical of the Millstone nuclear power complex in Waterford, Connecticut, for the past two decades.

The department said it received a complaint in October about “injured goats and general care issues” on Burton’s property in Redding, Connecticut. Officials said the search and seizure warrant was approved after citizen complaints and surveillance “that revealed animal welfare concerns, including mobility issues due to untrimmed hooves, excessive manure, lack of sufficient water, and structures in poor condition that did not provide adequate protection from the weather.”

Burton told The Associated Press on Thursday that officials seized about 65 goats. She denied any of them were in poor health or neglected in any way.

Burton accused officials of taking the goats not because of neglect, but to stop her testing of goat milk for radioactive materials linked to nuclear power plants. She also said she has been trying to find animal sanctuaries to take most of her goats, and state officials are aware of those efforts.

“This case is about goat milk,” Burton said. “And goat milk is not popular at (Department of Energy and Environmental Protection) or Department of Agriculture or the state of Connecticut because it’s proof positive of contamination of the environment by nuclear power plants. So that’s what this is about.”

Burton was the owner of Katie the Goat, which she adopted in 2006. She said Katie grazed 5 miles (8 kilometers) downwind from the Millstone nuclear complex and its milk contained excessive radioisotope levels. She brought Katie to the state Capitol in 2006 on a mission to inform officials about nuclear radiation. Katie died in 2012 from cancer, Burton said.

Burton said she kept goats on her property to continue testing of their milk, because her property is about 25 miles (40 kilometers) from the Indian Point nuclear power station in Buchanan, New York. She said, however, that she has not done milk testing recently.

The seized goats were taken to the Agriculture Department’s rescue and rehabilitation facility at the state prison in Niantic and were to be evaluated by a veterinarian, the agency said. The state will retain custody of the animals until the case is adjudicated in the court system, officials said.

State and local animal control officials visited the property numerous times and met with Burton to try to resolve the animal care concerns, the department said. Removal of animals is a last resort, officials said.

The Agriculture Department also said there were complaints dating back to 2017 about roaming goats and about the number of goats on Burton’s property. Disputes between Burton and the town over her goats are also the subjects of court cases that remain pending.