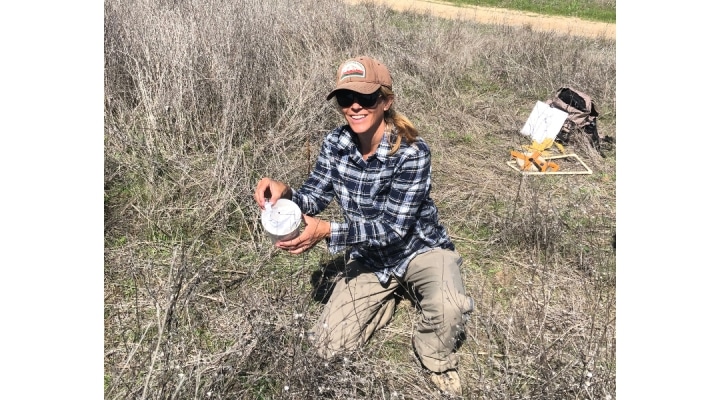 DAVIS, Calif. — In April 2021, scientists released weevils from the Mediterranean region of Europe at the Bureau of Land Management Magnolia Ranch day use area in El Dorado County to join the battle against yellow starthistle. Yellow starthistle rosette weevil is a newly approved natural enemy of yellow starthistle, which was introduced in California more than 150 years ago and, with no natural enemies in its new location, became one of the state’s most harmful weeds, infesting nearly 15 million acres.

In California, yellow starthistle can grow to shoulder height, forming massive, thorny patches that block hiking trails, crowd out native plants and present a wildfire danger. The plant is toxic to horses and its flowers are encircled by inch-long sharp spines that can pierce the eyes of grazing animals.

“Although the flower head insects sometimes attack high proportions of flowers, yellow starthistle is a very prolific seed producer with an individual plant producing as much as 100,000 seeds,” Oneto said. “Even if the insects reduce seed production by 50%, that still leaves a lot of seeds.”

The newly introduced yellow starthistle rosette weevil, first collected in Turkey as a prospective biocontrol agent in 1984, attacks the plant at the base. Since 2001, United States Department of Agriculture research entomologist Lincoln Smith has studied the insect at the USDA Agricultural Research Service laboratory in Albany.

“Larvae of the weevil develop and feed inside the root crown during spring, adults emerge in June, and then they spend the rest of the year hiding,” Smith said. “There is only one generation per year, so populations will grow slowly, which will gradually reduce yellow starthistle populations.”

The weevil presents no risk to other plants in California except bachelor’s buttons, which is an introduced plant from Europe, but not considered a noxious weed. Successful biological control with the weevil is expected to reduce yellow starthistle, but not completely eliminate the weed.

This was the second release of the beneficial insect in North America. The first release occurred in Solano County in April 2020.

Bureau of Land Management and University of California Cooperative Extension researchers will be monitoring the Magnolia Ranch site intensively over the next several years to determine the rate of rosette weevil reproduction and efficacy at feeding on yellow starthistle.

For more information, see A New Warrior Released in the Battle to Control Yellow Starthistle by Scott Oneto on the UC Weed Science blog.