Home / National / Off-farm activities are a growing share of food-system greenhouse gas emissions
A new user experience is coming! We'll be asking you to login to your Morning Ag Clips account March 1st to access these new features.
We can't wait to share them with you! Read more here. 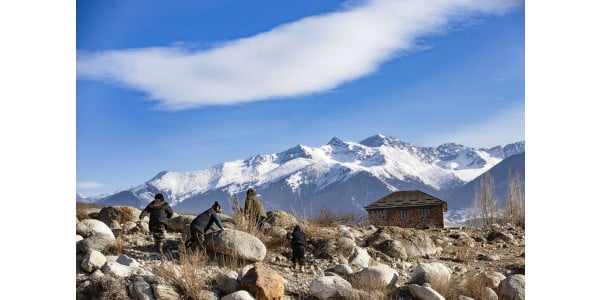 Children in Kyrgyzstan. (Courtesy of FAO)

ROME — Greenhouse gas (GHG) emissions due to land use changes such as converting forests to agricultural land have been decreasing over the past 20 years, a decline that has been counterbalanced by increased emissions – notably high in industrialized countries – from off-farm activities before and after food production according to a new study led by the Food and Agriculture Organization of the United Nations (FAO) and published today in Environmental Resource Letters.

The report, Greenhouse Gas Emissions from the Food System: Building the Evidence Base, estimates that food-system emissions amounted to 16 billion tonnes of carbon dioxide or equivalents (CO2eq) in 2018, an 8 percent increase since 1990. They now represent 33 percent of all human-caused GHG emissions.

That, lead author Francesco Tubiello, a senior statistician and climate change specialist at FAO, highlights how the global food system represents a “larger GHG mitigation opportunity than previously estimated and one that cannot be ignored in efforts to achieve the Paris Agreement goals”.

Governments around the world are pledging to reduce their GHG emissions and pursue carbon neutrality, and many have included mitigation targets for their agriculture sectors in their national plans. However, action in food and agriculture goes well beyond impacts on farms and ecosystems. Analyzing emissions trends through the broader lens of food systems offers additional insights and opens a range of possible solutions across the entire food production and consumption chain.

The new study provides rich data sets that are being refined ahead of the UN’s Food Systems Summit 2021, with important components already available for consultation here . It considers GHG emissions linked to farm gate production, land use change at the boundary between farms and natural ecosystems, and supply chains including consumption and waste disposal, to offer a crisper and more granular assessment of trends at the global, regional and country levels.

Over recent decades food systems emissions, both in absolute and per-capita levels, are increasingly dominated by farm gate and supply chains processes, with the impacts from land use change decreasing as economies develop. Furthermore, the study highlights important differences among countries, with developed economies per capita food systems emissions nearly twice those in developing countries.

The research team that compiled the study also consists of experts from Columbia University and NASA, several UN agencies and numerous policy-focused research centers.
The open-access report, which builds on another recent data-rich FAO study, offers the full spectrum of technical findings, and represents an important step for building a full database within FAOSTAT.

One emergent theme is that optimal GHG mitigation strategies require a focus on activities before and after farm production, ranging from the industrial production of fertilizers to refrigeration at the retail level, as this is the area where emissions are growing fastest – due in part to a slowdown in deforestation.

In 2018, GHG emissions from food systems were more than 16 billion tonnes CO2eq, largely emitted in developing countries in terms of absolute amounts.

Farm-gate and pre and post production emissions (those largely along supply chains, consumption and waste) represented two-thirds of the food systems total in 2018, with the role of emissions from land use change having decreased over time.

On agricultural land – crop and livestock processes within the farm gate but also including relevant land-use changes – amounted to 10.4 Gt of CO2eq, 80 percent of which occurred in developing countries. That represents a 3 percent decline from 1990, as increased on-farm emissions of nitrous oxide and methane were more than offset by a decrease in emissions from land-use change such as deforestation or peatland degradation.

Net forest conversion – from natural ecosystems to agricultural croplands or pastures, a proxy for deforestation- remained the largest GHG emission source over this period, at nearly 3 billion tonnes CO2 per year, but declined significantly over time, by over 30 percent from 1990 to 2018.

The new analysis adds detailed country data estimates on domestic food transportation, which emitted globally a mere 0.5 Gt CO2eq in 2018, but have increased by nearly 80 percent since 1990, and nearly tripled in developing countries.

GHGs generated by energy use – largely carbon dioxide from fossil fuels – along the supply chain amounted to over 4 Gt CO2eq in 2018, an increase of 50 percent since 1990.

The FAO-led study also characterizes country-level emissions from food waste disposal, half of which consist of methane, reaching globally nearly 1 Gt CO2eq in 2018.

The declining trend of GHGs linked to land-use change is welcome, but points to the importance of maintaining and even accelerating the good progress achieved in recent years, while focusing on designing climate-friendly practices along the whole food supply chain including – the authors note – the critical role that dietary choices and consumption patterns can play by impacting supply-side production activities.

Assessing the data and trends from a food-systems perspective points to some immediately actionable pathways – such as improving nitrogen use efficiencies in crop and livestock production, mitigating solid food waste disposal and optimizing on-farm energy use – as well as accelerated efforts to improve management of agricultural land while protecting natural ecosystems. They also underscore that energy use beyond the farm gate will become an increasingly prominent component of total food-system GHG emissions in the coming decades, so that food-related mitigation can benefit from a whole-system view and broader planning at national level.